Many well-known athletes are famous for football, basketball, or even softball, but these particular athletes in this sport brought all new meanings to hardworking athletes. Gymnastics first began in Greece when a Greek man jumped over a bull's horns, then everyone started following and then it became a competition in who can jump the highest. It has been known around the world for 2,500 years and is known as one of the oldest sport ever made.

In Greek, the word gamos means “naked”, and gymnastics literally means “exercising naked” and women were not allowed to exercise with the men because of this.

According to the legend, King Oenomaus offered his daughter in marriage to any man who can kidnap her and make a successful getaway during the night in a chariot. Thirteen men tried and the fourteenth man, Phelps, successfully accomplished the challenge and to celebrate the marriage, King Oenomaus started the Olympic Games in Olympia, a Greece Valley. The Games went on for 5 days, and all of the Games were footraces. Men were only allowed to attend, if women attended, then they would be put to death immediately.
Modern gymnastics began around the 1800's when a German man named Johann Frederich Guts Muths developed a system of exercise based on “bull jumping,” but the true father of gymnastics is Frederick Ludwig Jahn, he opened the first opened modern gymnasium in 1811. The floor exercises were discovered by Swedish educator, Peter Henrick Ling.

Gymnastics by Dan Gutman is a very interesting book! It gives you a lot of information about gymnastics. If you ever need to know what to do or what not to do during a gymnastics meet, then you should read this book! 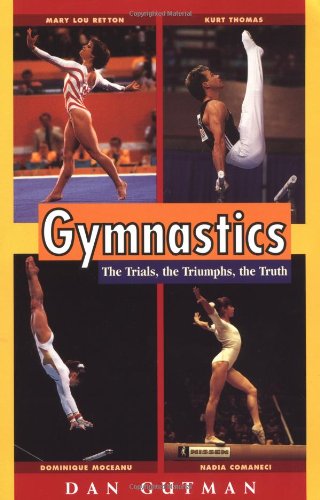