All actions in life pursue invariably an understanding of self. In Heart of Darkness, Conrad creates an allegory, an archetypal story of journeys: through hell, back in time, and to the core of the psyche- the heart of darkness.

In the novel, Marlow makes a journey through hell, created as an allegory. Marlow’s journey through hell begins as he enters the Belgian city of Brussels, in order to sign some paperwork regarding his voyage to the Congo. Marlow encounters two women while in the building of his employer in Brussels, apparently “guarding the door of Darkness” and “knitting black wool as for a warm pall” for the greater majority of the souls that pass through this edifice (Conrad 47). These women serve as allusions to the fates in Greek mythology, deciding the destiny of men and the point at which a man’s life ends. Additionally, the door of Darkness that these women seemingly guard alludes to the gates of hell in Dante Alighieri’s Inferno. Thus, developing Marlow’s journey not only as a journey through hell in a literal sense that he will be traveling though a hostile and savage environment, but also in a symbolic sense that he is passing through the gates of hell and embarking upon a voyage that will take him to the most immoral of human sin. While on his way to the company’s central station in the Belgian Congo, Marlow steps into the shade created by some nearby trees and feels as though he has “stepped into the gloomy circle of some Inferno”, and realizes that the native workers around him had “withdrawn to [the shade] to die.” (Conrad 55) This allusion to Dante’s Inferno displays the effects that the literal and figurative hell that Europeans have created in the Congo has on the native inhabitants. The Europeans have coerced the natives into signing labor contracts that the Congolese do not understand and consequentially violate. Thus allowing the Europeans to call them criminals and literally work them to death, in a figurative hell, as a paradoxical punishment for their misrepresented sins of savagery. At the end of Marlow’s journey through hell, as he converses with the brick maker, Marlow describes this lying and deceitful man, who steals confidential company letters for the manager, as a “papier-mâché Mephistopheles” that seems as though he would have “nothing inside [of him] but a little loose dirt”. (Conrad 67) Mephistopheles appears in the German Faust legend, as the devil that convinces Faust, a scholar who has a greater desire for knowledge than he believes capable of attaining individually, to “surrender his soul to Mephistopheles” in exchange for happiness and knowledge (Bomarito). Thus, the connection between the brick maker and this devil displays the allegorical wrongdoing that takes place throughout the Congo, in which men sacrifice their integrity and inner values, and symbolically their souls, in order to gain knowledge. Therefore, Marlow’s archetypical journey through hell, develops the novel as an allegory, in which the inner strength and power of will that men possess parallels with the salvation or lack thereof of their souls.

The end of Marlow’s journey through hell parallels the beginning of his archetypal journey back in time. The beginning of Marlow’s journey back in time is marked by his recognition of the smell “of primeval mud,” and the perception of “the high stillness of [the] primeval forest” as he continues to listen to the brick maker ramble on (Conrad 68). Therefore, as Marlow begins to contemplate Kurtz, as a result of the brick maker’s speech, he embarks upon a journey back in time, in order to display the continuity and resiliency of nature. Soon after this instance, Marlow mistakes the arrival of the Eldorado Exploring Expedition for “an ichthyosaurus … taking a bath of glitter in the great river.” (Conrad 72) The connection between the ichthyosaurus and the Eldorado Exploring Expedition, establishes the expedition as representative of the first colonizers of the area. This notion works on multiple levels: first that the expedition serves to display what the initial colonization of immense wilderness would have been like; second to portray the Belgian folly in employing such outdated tactics; and finally to establish the concept that the wilderness will always recover from man’s intrusions, returning over time to appear as though untouched. Marlow goes on to describe his journey up the river as “like traveling back to the earliest beginnings of the world,” the times when vegetation, waterways, and animals reigned supreme, times in which people would feel as though they were “in another existence”. (Conrad 77) Thus, the entirety of Marlow’s journey back in time conveys the supremacy of nature, which has dominated the majority of earth’s history and even mankind’s brief existence, in order to reveal the absurdity of human attempts to conquer nature.

The allegorical journey to the core of the psyche in the novel portrays Marlow’s archetypal journey to self-discovery. Marlow begins to progress towards self-discovery as he begins to connect with the natives, but only really begins to discover himself upon evaluation the wilderness’ ability to stimulate “forgotten and brutal instincts” within Kurtz (Conrad 120). Throughout the novel, Marlow is provided with a glorified image of Kurtz as a prodigy and a beacon of light for all to follow. However, Marlow actually encounters Kurtz as an embodiment of the polar opposite from Marlow’s expectations, developing worthlessness of apparent civility in the absence of social checks. Thus, Marlow “saw the inconceivable mystery of a soul that knew no restraint, no faith, and no fear,” but did not possess the inner strength to take advantage of these gifts (Conrad 121). In essence, Conrad has developed two levels of self: an outer, apparent, and superficial layer, and an inner, figurative, value driven, and all important core. After learning of Kurtz’s death, Marlow summarizes life as a droll and “mysterious arrangement of merciless logic for a futile purpose.” (Conrad 125) This summary serves as the culmination of Marlow’s journey to the core of the human psyche, through an understanding both himself and Kurtz as men who fought to maintain civility, only to discover that civility only covers, and can never replace innate human savagery. Marlow gained his enlightenment in this respect because he “had been permitted to draw back [his] hesitating foot” from the edge of darkness and to watch as Kurtz seemingly lived for him (Conrad 126). This concept develops the shadow archetype, in which Kurtz lives out the actions that Marlow cannot, allowing Marlow to gain the enlightenment that Kurtz gains as he steps “over the threshold of the invisible” only as an observer (Conrad 126). By developing differences between man’s appearances and intentions, Conrad allows for “unknown and unbounded possibilities” in the scope of his work, by creating obscurity in regards to man’s intentions (Skinner 12). Therefore, a further allegorical level is added to the novel, in the form of humanity’s appearances and intentions, achieved through the shadow archetype.

Thus, Marlow’s recognition of himself as a savage creature, as a result of his journeys though hell, back in time, and to the core of the psyche, represent archetypical patterns, and function allegorically. Thus, the novel creates an obscurity that allows the audience to go in whatever direction their own journeys of self-discovery may take them.
?
Works Cited
Bomarito, Jessica, and Russel Whitaker, eds. "Faust." Literature Resource Center. Gale, 2005. Web. 18 Oct. 2011.
Conrad, Joseph, and Julie Stern. Youth / Heart of Darkness / Typhoon / The Secret Sharer. New York, NY: Amsco School Publications, 1974. Print.
Skinner, Stephen. "Obscurity, Apophasis, and the Critical Imagination: The Unsayable in Heart of Darkness." Literature Resource Center. Gale. Web. 18 Oct. 2011. 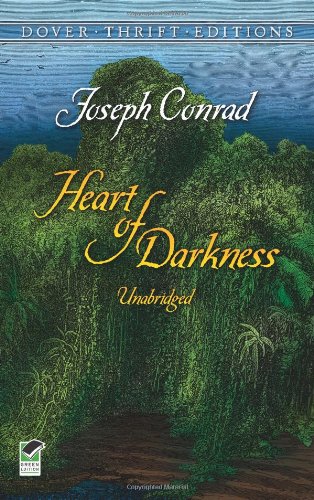