The Mists of Avalon by Marion Zimmer Bradley | Teen Ink

The Mists of Avalon by Marion Zimmer Bradley

Sure, we all know the story of King Arthur: the guy who pulls the sword out of the rock, beats up a bunch of people with the aid of a wizard, and can’t seem to hang on to his wife. But in this uniquely unique take on a tale shrouded in folklore, the whole story is told, beginning to end, from the eyes of the women who surrounded him—his mother, his enigmatic half-sister Morgaine, better known as Morgan le Fay, and his conflicted wife Gwenhwyfar, or Guinevere.

This story spans lifetimes, a saga closely interwoven with the mysterious isle of Avalon, where the Celtic priestesses of the Goddess fight desperately to retain their matriarchal pagan faith despite the rapid growth of Christianity. The main protagonist is the Lady of Avalon Morgaine, who recounts events both before her birth and after Avalon has passed through the reaches of time by using her gifts of magic and Second Sight.

In this book King Arthur and his knights are supporting characters while the women are developed into complex human beings, possessing mystical powers and acting as major movers of history behind the scenes, including some pretty ruthless manipulation. This is a bittersweet story about conflict and duality, and finding balance between them all: male versus female, paganism versus Christianity, love versus duty, even between different kinds of love. But although politics and wars, affairs and marriages, birth and death pass one after the other, the mists of Avalon remain beautiful just the same. 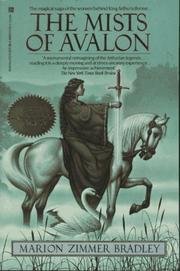