The Merchant of Death by D.J. MacHale | Teen Ink

The Merchant of Death by D.J. MacHale

Bobby Pendragon is maybe more popular and athletic than most, maybe unique in being best friends with a nerd and crushing on a girl with whom he has a long-standing rivalry, but still a normal 14-year-old boy in the end. This is, until his eccentric Uncle Press shows up and drags him through a gateway into another world. Apparently, he’s not quite normal---he’s a Traveler, a guardian of Halla, comprised of ten worlds, or “territories,” only one of which is Second Earth. And his mission is to fight Saint Dane, some evil psycho determined to create Halla anew. The strategy is simple. Saint Dane is trying to tip each territory into chaos, one at a time. The Travelers have to make sure the territories take the peaceful route.

On this territory of Denduron, one group called the Bedoowan live in comfort by enslaving the Milago, who exist practically in the middle ages. But the Milago have a plan to blow up the Bedoowan, even if they destroy their own village in the process. Bobby really has his work cut out for him trying to reconcile the two factions, even with the help of some other Travelers.

Bobby sounds and acts pretty much like a normal teenager, Traveler or not, complete with moments of incredible stupidity. The story is told largely via journals Bobby writes and sends to his friends back home, the nerd, Mark and his girlfriend, Courtney. It’s interesting hearing their reactions when they discover their missing friend is on some crazy sci-fi journey.

This book is only the first in the Pendragon series, a ten book long odyssey of distant worlds and convoluted plans and general mind-screwy-ness. The next book takes Bobby to the water-covered world of Cloral 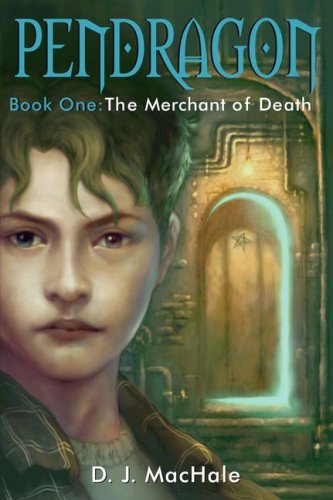