Flowers for Algernon by Daniel Keyes

Written in the form of short journal entries, 'Flowers for Algernon' intrigues its readers from the very beginning. The entries filled with misspellings and strange punctuation puts us into the shoes of Charlie Gordan in the most natural way, and before we know it, we find ourselves sucked into the life changing experiences that Charlie face.

Charlie Gordan is a 37-year-old honest man of low intelligence. When he undergoes an experimental surgery that increases his intelligence, the low IQ that once chained him down leaps to an unbelievable 200. He experiences the joy and strength of processing new knowledge but like all things, intelligence comes with a price. Charlie is shocked when his once innocent eyes open up to the beauty and cruelty of reality. He also faces emotional pain and sorrow when he sees the way those who are mentally retarded are treated and are isolated from the world. Through journaling, Charlie keeps record of his progress and the effect the surgery has on his life.

As Charlie's intelligence begins to grow, his writing level also begins to change. His misspellings and punctuation gradually improve as you flip each page, leaving you intrigued for more. How Keyes organized this book was one of the best traits of 'Flowers for Algernon' and it was undoubtingly far more interesting to see the level of Charlie's intelligence in the form of a journal than just a plain reporting of what happened.

Though the story of a mentally retarded man undergoing an 'intelligence upgrade' surgery seems a little far-fetched, the message rings strong and clear throughout the book. "Shut up! Leave him alone!", Charlie says, "It's not his fault he can't understand…….But for God's sake…….he's still a human being." Charlie announces angrily, when he sees a mentally retarded boy working as a dishwasher being laughed at by an amused crowd. In this scene and throughout the book, Keyes shows us how wrong and cruel it is to consider those who are slightly different from the majority as stupid and unworthy of respect.

'Flowers for Algernon' has grown to be loved by readers all over the world and it won't be an exaggeration to say the ending was a big part in this book's success. Surprisingly though, this wasn't quite the case in the beginning. When Keyes was looking for a publisher for 'Flowers for Algernon', he was advised to change the ending into a "Happy Hollywood" one but of course, he refused. His refusal proves to have been a wise decision for his unforgettable story of Charlie has now become famous around the world and has been made into a novel, a play, a movie, and even a musical. One cannot help but agree more that his tragic ending was what made Keyes story all the more unforgettable, meaningful, and thought-provoking. 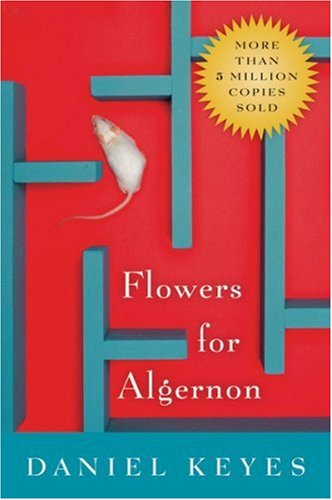 bhoney said...
on Jun. 14 2014 at 4:51 pm
This is a very interesting book.  Parents need to know it is full of profanity and sex before they allow their children to read it.  Why isn't that in the review?