The premise of The Marriage Plot, Jeffrey Eugenides' new novel, is anything but promising. It's a jaded story, with cliché after cliché in an attempt at giving a twist to what is, at its core, a coming-of-age tale.

Of course, Eugenides puts his signature intellectual spin on it, using the classic nineteenth century novel format, exploring whether or not that old device, “the marriage plot,” can be applied to a modern 20th century story where the implications of marriage are mitigated by divorce and pre-nuptials. It's an interesting concept, especially since the main character is borderline obsessed with authors like Jane Austen. Nevertheless, he fails to add much zing to such a tired story line.

A beautiful, rich girl named Madeleine Hanna, from a high-class family in Prettybrook, Connecticut, goes to Brown and has a great time there. The story begins shakily at her college graduation, with Madeleine being awoken from a hangover-induced sleep by her parents ringing her buzzer for graduation-day breakfast. During breakfast, we hear about an ex-boyfriend and meet another young man who Madeline has a complicated history with. And so, the main conflict is already laid out for us: two men, one woman. Madeleine must make a decision about which is right for her, and then live with the consequences.

Luckily for The Marriage Plot, Eugenides is a master writer. He may not be able to salvage the plot or the clunky opening scene, but the beautifully drawn characters almost make up for it. And although he borrowed heavily from his real-life experiences as a Brown undergraduate, basing characters on people he knew there, each is vibrant and exciting to read about.

The three main characters are especially well-done. With Madeleine, Eugenides voices her conflicted feelings almost constantly while steering clear of a frustratingly wishy-washy attitude. He gives her wonderful quirks: an obsession with nineteenth century novels, her golden rule that the man always has to ask her out, and cramped, tiny handwriting that shows how constrained she keeps herself.

Eugenides also creates Mitchell, one of her two love interests, with a captivating vibrancy. Although he seems a typical college-age young adult, Mitchell has strange characteristics that are difficult to connect to. Though not a member of any religion, Mitchell is a religion studies major.

It is these small quirks in Madeleine and Mitchell that make their characters vibrant and interesting. When it is impossible to stereotype a character, it is impossible to be anything less than completely engrossed in what they may or may not do, say, or think next. We may know the basic plot inside and out, but Eugenides keeps his readers guessing.

Eugenides has also managed to write a book that masterfully appeals to the teenage mind without being too angsty. And even though this genre can be shudder-inducing, there is a reason why so many stories of this type are made into books, movies, TV shows, and plays. A coming-of-age story always works because the reader can connect on some level.

Even though it's set in the 1980s, The Marriage Plot still resonates because every teenager goes through roughly the same stages of development and self-reflection. The characters are trying to find their place, to figure out religion, love, and depression. We are just as obsessed with rebellion, conformity, individuality, and just plain weirdness as the young adults in the book. In some sense, and especially for an audience in a place like my private school, this book puts our own goals in a very Emersonian perspective. For the characters in the book, going to a top college, having a prestigious internship, or even money do not necessarily lead to happiness. The remaining strategy, applied almost by default, is to live according to our innermost moral codes – a philosophy that Emerson, Eugenides, and (I hope) all of us can get behind. 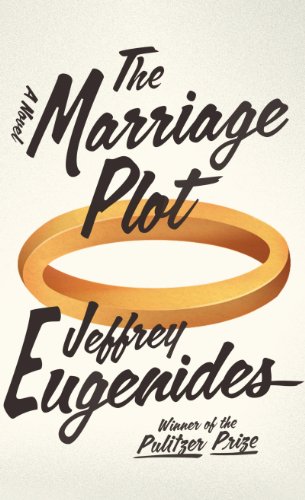