Harry Potter and the Deathly Hallows by J. K. Rowling

The extraordinary world of magic, sorcery, and friendship unfolded before my very eyes while reading J. K. Rowling's last book of her famous series; Harry Potter and the Deathly Hallows. Novelist J. K. Rowling made me feel as if I were there, besides Harry, as he went on his difficult yet thrilling adventure in overcoming, He-Who-Must-Not-Be-Named, the most powerful and cold-hearted wizard, Voldemort.
Rowling's unforgettable characters and way of portraying the settings in a realistic and picture-like way were what I liked best about this book. She puts the readers in Harry's shoes and really makes them care for his two best friends, Ron and Hermione, while share his joy and frustration as the events unravel. The story, itself, was amazing but her life-breathing, courageous heroes are certainly what lured readers world-wide into falling in love with this series.
In the seventh book, the Ministry of Magic has been taken over by Voldemort and his followers known as Death Eaters. Muggles (those who are not pure-blooded wizards and witches) are being slaughtered in large numbers and Severus Snape, the teacher who has hated Potter as long as Harry can remember, is now in charge of the magical school of Hogwarts. The death of the powerful wizard and teacher Albus Dumbledore, who was also a mentor to Harry Potter, has shaken the entire magical world along with the people who had trusted Albus's goodness. Dumbledore's last favor to Harry was for him to hunt down and destroy all the Horcruxes (the scattered bits of Voldemort's soul in magical items), in other words, destroy Voldemort once and for all. Though Harry, too, begins to doubt whether Dumbledore had told him only the truth, something inside him urges him to finish the task. He is accompanied by Ron and Hermoine and is supported by many people who put their own life at risk by helping him. While Harry continues to hunt down Horcruxes, situations in Hogwarts and the Ministry of Magic get worse. With Snape as headmaster, two Death Eaters have become teachers and students are forced to torture other students who stand up against the Carrows (Death Eaters). On top of that, Voldemort has finally gotten hold of the Elder Wand, the most powerful invincible wand in the world.
Harry's adventure is a long and dangerous one but with magic, loyalty, sacrifice, courage, and friendship, the truth is revealed and his quest is completed.
The largest theme of the story is 'Good wins over Evil' but the importance of courage, the power of love and friendship, and the strength of believing in yourself rings clear throughout the book, touching the hearts of readers in a rather magical way.
Fantasy books on wizards, witches, and magic never quite appealed to me. I couldn't see why or how people would want to read a story about a scarred boy shaking his wand, but author J. K. Rowling changed that. A new world-filled with more excitement and heart thumping adventure than I had ever imagined- awaited me, and before I knew it, I too, had fallen deeply in love with the world of Harry Potter.
It was, simply said, a magical and unforgettable experience to read this amazing finale. I was able to see that the Harry Potter series will most certainly be loved by people, both adults and children, for generations to come. 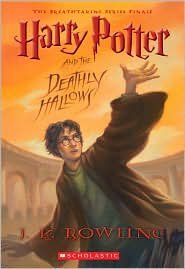