In the story, Hatchet, by Gary Paulsen Brian Robeson, a troubled teenager is forced to survive in the woods of Canada where he becomes a whole new person. While on his way to his recently divorced father’s house, the pilot of his plane has a heart attack. Brian barely escapes death in the plane crash that leaves him stranded with nothing but clothes and a hatchet. He will be forced to take measures that he would never even have imagined if he wants to live while coping with the growing fear that he will never be rescued. Brian will never be the same.

Brian greatly changed in the way he views nature. Many people do not know about nature. They actually learn more from experiencing it. Most see nature as either simple or very complex but it is actually both. This definitely is represented by Brian. When he comes to his senses after the crash, Brian tries to rely on what he has seen in movies. Early in the book on page 44 he says, “In the movies they always showed the hero finding a clear spring with pure sweet water to drink.” He is thinking too much about unrealistic situations. He is not paying any attention to what his around him, only on what he knows. Brian needs to become united with his instincts. He must take advantage of his surroundings instead of ignoring them. When he realizes this, he finally sees nature for what it really is; a giant place, teeming with life. On page 121, Brian was gathering wood when he spots a large wolf looking over the lake but, “Brian knew the wolf for what it was, another part of the woods, and another part of all of it.” This clearly shows how he has changed. His isolation in the woods gave Brian wisdom, causing him to be unafraid of the forest and its many inhabitants. He knows that they do not want to hurt him and will leave him alone as long as he does the same. His wisdom will carry throughout the rest of Brian’s life.

Brian became much more sensitive towards others. He developed new values in the way he treats all living beings. When he made his first kill, he was full of adrenaline. He soon changes and whenever he killed an animal Brian would feel a building guilt in the pit of his stomach. He feels wrong by ending an innocent life but suppresses these feelings by remembering that he is doing what necessary for survival. His change is also shown in the sequel, Brian’s Winter, where Brian kills a deer but immediately wishes he had never taken the shot. It was a clean kill, and the deer immediately went down. He felt that it was unfair because the deer did not even have a chance; it was minding its own business and it was not even given the chance to escape. This shows the change mainly because if he had seen a dead deer on the side of a road before the crash he would think nothing of it. Now when he sees a dead animal he thinks long and hard about it. He pictures what happened and imagines the pain of the animal when it died. He is also more sensitive to memories. On page 160, Brian finds the survival pack but sees the pilot’s dead body in the process. When he steps out of the plane and opens the pack he remembers the pilot sitting in the bottom of the lake with the rest of the plane. Brian could not stop thinking about it, so he went to the edge of the lake and, “looked at the plane and focused his mind, focused it on the pilot and thought: Have rest, have rest forever.” This definitely shows how much he has changed. Before, he would have tried not to think about the pilot and would eventually forget but he did not feel right until he showed his respect. Brian embodies the belief that the life of each and every living thing has value.

Brian had a whole new perspective on life. After he is rescued, Brian treats the world around him differently. For example, on page 193 it says, “For years after his rescue he would find himself stopping at grocery stores to just stare at the aisles of food, marveling at the quantity and the variety.” Brian had to work so hard to obtain food because there was so little of it. It also shows that he has become much more observant. Not many people see that the food they take for granted every day is a special gift. People who are poor and affected by poverty fight for survival every day. In the woods Brian had so little food and was forced to take whatever he could manage. This led to his epiphany of the importance of food. He also became much more thoughtful. According to the book, after he was rescued, Brian would, “think slowly about something before speaking (p. 193).” This shows that he is more careful and the time in the woods taught him to think about hard everything, even something as simple as speaking. This can also help him make fewer mistakes and say more meaningful things. Brian was left with a very different view on life.

All in all, Brian’s experience turned him into a whole new person. He viewed nature differently, he saw it for what it really was, a giant place that is teeming with life; each and every thing important in their own way. He became way more sensitive. He regretted the kills he made while hunting and he shows everyone that all life, human or not, should be shown respect. Brian came home with a completely different perspective on life. He realized that he was lucky to survive and that he should be grateful for the things that he has. Brian will never be the same. These ideas are very important; they show that sometimes the worst situations cause changes for the better. Brian became someone who is caring, thoughtful, and wise. His trip in the woods cleansed his soul and opened his eyes to the world. As a wise man once said, “Tough times bring out the best in people.” 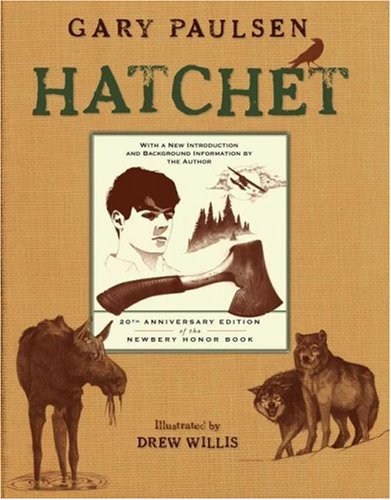 jonahshamoon said...
on Apr. 20 2015 at 9:14 pm
@rickrace I don't think he meant it intentionally, Gary Paulsen writes mostly books about culture & survival from what he has seen with his own 2 eyes.
rickrace said...
on Dec. 7 2014 at 11:47 am
My son has had to read several books by gary paulson in school now. Personally I find these books to be somewhat sick and morbid surely there is better reading than this for our kids.
nicky said...
on Mar. 21 2014 at 7:40 pm
U go girl\boy
Harry Styles said...
on Feb. 16 2014 at 6:23 am
You shouldn't say that if You are so against this book then try to write a book.
Rebecca said...
on Nov. 1 2012 at 4:32 pm
Hatchet was an amazing book that takes you through 13 year old Brian Robeson's fight to survive when his plane crashes in the miidle of nowhere, all alone. While evolving and maturing he experiances flashbacks and dreams that take him through the secret that broke his family. He goes through firsts, sacrefices, and celebrasions. Brian soon thinks of the woods as his home and continues to wait to be found and rescued. After reading you will never fully think the same way ever again I LOVED IT! You have to read it.
Isabel said...
on Jan. 18 2012 at 1:17 pm
This book is a very good book just like all the other books that Gary Paulsen has written! I definately suggest that you read all or any of his books!
ShontelleSymone GOLD said...
on Jul. 8 2011 at 6:51 pm
ShontelleSymone GOLD, New Castle, Pennsylvania
15 articles 0 photos 51 comments

View profile
I had to read this book for school. I did not enjoy it at all. I have never read a more boring or dry book in my life and I hope I never will. Sorry for my words, It's just my opinion. This is not directed to anyone but the author. This article was really good. However, the book.... I could live without