Can't Get There From Here by Todd Strasser | Teen Ink

Can't Get There From Here by Todd Strasser

Jesse, also known as Maybe, is a strong, determined, and rebellious teenage girl, but she has one more struggle most teenage girls don't have to face; she's homeless. In the book Can't Get There From Here by Todd Strasser, Maybe's everyday life is planned by what she needs to survive at that time. You may think that surviving is major in their minds, and although it is, they don't expect long great lives. In some ways death is saving them. Maybe and her “tribe” of Maggot, OG, 2moro, Rainbow, Country Club, and Tears are a group of young people with different backgrounds, together in New York City, striving off of stranger's generosity and pure luck. As you follow Maybe everyday, you wonder why life on the streets is better than their own homes. Each being on the street has a different story to live with. Maybe thinks it's destiny that she's on the street. Is that true or is that just her attitude?

Throughout this book I was forced to appreciate what I have. It really gave me a feeling of what it would be like to live with nothing. These young men and women live in such dangerous, sad conditions that only these specific, horrifying, realistic details could describe it. I experienced Maybe's tribe slowly dying and dividing off almost to extinction. I was side by side with Maybe as she lost friends, fought with weather, suffered from hunger, listened to fake promises, and discovered her guardian angel. Maybe's life is changed forever when she meets Anthony from the public library. He treats and cares for her like she's never been given before. It's hard for Maybe to break down enough to trust, but Anthony may be just the person Maybe needs to change her life.

Reality is exposed when a car trip to return a friend finally displays a true promise. This is the first time an adult had promised something and it came true; it was even more magnificent than Maybe had expected. Could this be the motivation Maybe needed to change her lifestyle? This is an amazing story, with a plot no one could predict. It gave me an experience of a lifetime without even having to be there. If you want to understand the hard life on the streets, then this book, Can't Get There From Here by Todd Strasser, is for you. 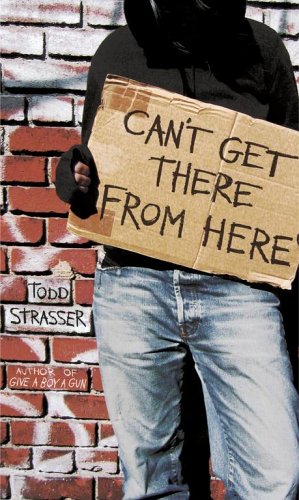