FBI, Freaky Boys Incorporated, the group every guy wants to join at, Cross High School especially one particular boy, Ian Striver. FBI gives you tests to join their high-class group. Ian Striver, recruiting to get in, last test was to see if he can sleep with a girl in two weeks, but they, FBI, have to pick her.
Kylie, was dubbed the unlucky soul that got chosen. Clueless, but, yet suspicious why Ian Striver, the most popular guy was after her decided to give him a chance. As the heat ignites between Kylie and Ian she doesn't know what will happen between them if they keep moving so fast.
Meanwhile, Ian learns that she's a virgin, this would make the goal he was striving to achieve harder to succeed. At the same time he hopes Kylie will never find out for fear he will lose the most amazing girl he ever knew. 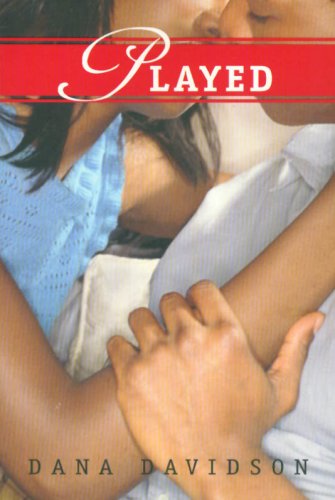 LOVEROFPLAYED said...
on Feb. 15 2013 at 5:11 pm
THE BEST BOOK I EVER READ .......... so i have a question did ian and kylie ever go out? did she give him another chance?
shamiqua16 said...
on Oct. 24 2011 at 8:44 am
i loveeeeeeeeeeeeeeeee loveee loveeeeeeeee this book. i finshed it in one day bacause i coulnt put it down. i wish there was a second part to this boook & DANAA DAVIDSONNNNN : yhuu are a terrificcccc writerrrrr<3333333333
JosyyyPineapple(: said...
on Sep. 7 2011 at 10:13 pm
I'm not sure who I would consider the antagonist Ian or Micheal? Any answers? GREATTT BOOK love it
Kisha said...
on Aug. 12 2011 at 2:45 pm
Dear Dana Davidson,
I have just completed your novel Played, and I have to say it was the best book I have EVER read. I am 17 year old from Texas and, I strongly related to all the characters in the book. I enjoyed the humorous but urban dialogue between each character with the depth of emotion expressed from Ian and Kylie.

A lot of authors who write books for teens hold back on the truth and censor a lot of honest content but you didn't. I thank you for that and your brilliance as a writer. Played is a book filled with realness, love and lessons all combined. I passed this book around to all my friends and we all agreed that this is a wonderful book.

Mrs. Dana Davidson we appreciate your gift as a writer and we can't wait to read another one of your creations.

Favorite Quote:
Be who you want to be!

sincerely,sha-sha baybe luvin my hatters and always
shahrukh55 said...
on Mar. 6 2009 at 8:08 am
I think this site is full of writers with alot of potential