A Damsel In Distress by P.G. Wodehouse | Teen Ink

A Damsel In Distress by P.G. Wodehouse

The utterly funny, witty and of course, satirical language of the 20th century novelist P.G. Wodehouse, accompanied by a glossy book cover and a tipsy handwriting illuminating the words, “A damsel in Distress” featuring a young man grappling for a rope onto which a shabbily dressed chauffeur was hanging for dear life, got me cracking up and of course, pushed me into buying this book.
And boy, I was in for a treat..
For those of you who like to sit back and enjoy a confusing turn of events, a house full of absurd characters, a love story going haywire and a bunch of servants betting on failed marriages, this book is a hidden treasure for you.
The story begins with Lord Marshmoreton, the seventh and most peculiar Earl of the large estate of Belpher, stooping over a rose hedge, cursing bugs and crickets. He is, in fact, described as the ‘most enthusiastic amateur gardener in the land of amateur gardeners.’ Standing right beside him is Lady Caroline, his widowed sister, shouting of top of her voice at her brother for being so engrossed in his roses and bugs that he wasn’t paying attention to who his daughter, Lady Maud was going to marry. While she fills up the ears of her dear brother on about how Maud should marry her step son Reggie Byng, another hysterical and lopsided character with bigger a mouth than brains, Maud goes over to talk to Reggie and explain to him, why they shouldn’t marry and why should they refuse each other. Maud expresses her love for an American guy that she met in Wales last year while Reggie too, expresses his love for Lord Marshmoreton’s personal assistant, Alice Faraday.
Lady Caroline, aware of the sparks flying high between Maud and the American ‘laddie’, makes significant efforts to stop Maud from leaving the castle to meet him.
All the same, Maud somehow persuades Reggie to take her to London to meet her long lost love. Meanwhile, George Bevan, an American theater music producer in London is roaming the streets, depressed with his life and the absence of love in it when his eyes fall upon Maud.
If there exists something called Love at first sight, this was it.
What follows next is incalculable confusion which will have you rolling on the floor, overcome with fits of hysterics as George Bevan follows Maud to the Belpher castle and the Marshmoretons take George to be the same American guy that Maud had fallen for.
A Damsel in Distress is a comedy of errors, situational humor and like a magnet; you won’t let go of it until you’ve read and savored every single word of it.
‘To dive into a Wodehouse novel is to swim in some of the most elegantly turned phrases of the English language’. 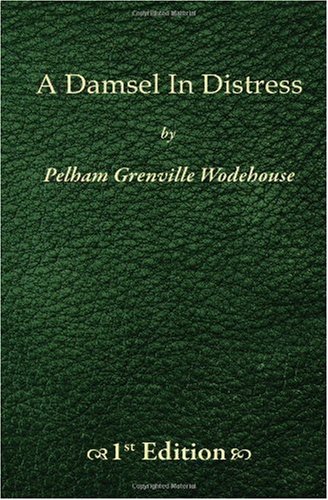 
Buy from Amazon
The author's comments:
The funniest book that i've read in w while... P.G wodehouse is a class apart!
Post a comment
Submit your own

But im into russian authors these days.

I followed your advice... and I just finished A Damsel in Distress!

It was very good. Even though it is written in Old English(I had to turn on my brain to old English mode which was fairly easy because I've read lots of classics), it was still pretty easy to get into.(Heck, I even talk like an old lady!)  Somtimes when I read the Classics, it's hard for me to get into them because of the language. So far the only old English books I could really get into is...

And even though the book was written a hundred years ago, I still found it to be pretty darn funny!

I really liked the story, I could really relate to it(especially since I am in love at this time)

I liked everything about this book, the plot, characters...etc

In fact, I am reading in reading more of Wodehouse's books. Are you?

View profile
I really want to read this book. I'll put it on my to-do list. :)