The Color of Magic by Terry Pratchett | Teen Ink

The Color of Magic by Terry Pratchett

In another universe swam the great star-turtle A’Tuin…upon whose shell stood four elephants…holding up the flat planet of the Discworld, whose creators apparently have more imagination than common sense.

And in the city of Ankh-Morpork, the Discworld’s most cowardly resident and worst wizard to boot, Rincewind, is assigned to guide the Discworld’s first tourist, Twoflower, around his city. Twoflower has a trunk full of gold, and, among other things, wants to meet a genuine barbarian and see a real Morporkian bar fight. Ankh-Morpork is filled with cut-throats and thieves. Rincewind starts running in the opposite direction at the faintest sign of trouble. There is obviously a problem.

This book can loosely be summarized by “Rincewind runs away from a whole lot of life-threatening situations and Twoflower has zero sense of self-preservation,” but that really doesn’t do justice to the sheer hilariousness of this book. The Color of Magic is pure satire, making fun of just about anything. You have to read it about three times to get all the jokes, and it still doesn’t grow old.

The Color of Magic is the very first book in the Discworld series, nearly forty books set on this flat planet and mocking everything from war to opera to Australia to even religion. (Er, don’t read that last one if you’re easily offended. Really.) But there’s a surprising amount of philosophical depth in between the funniness. These books make you look at the world a little differently. After all, it’s flat. 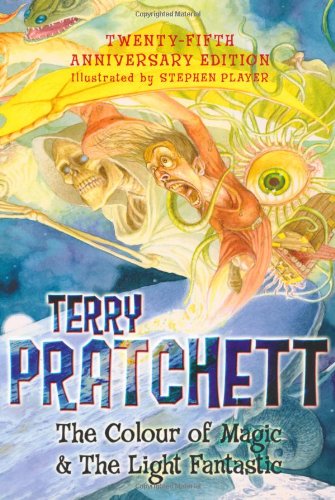 
Buy from Amazon
The author's comments:
I really, really love this series. You can kinda tell from the review. I swear, the whole world ought to read Discworld and we'd live in a better place.
Post a comment
Submit your own