The Ear, the Eye and the Arm by Nancy Farmer | Teen Ink

The Ear, the Eye and the Arm by Nancy Farmer

The Ear, the Eye and the Arm is technically science fiction, but doesn’t read like sci-fi at all. It takes place in Zimbabwe, the year 2194, and follows three siblings, Tendai, Rita, and Kuda, as they experience numerous adventures throughout their city, Mubare Musika.

The kids are the children of the country’s totally paranoid Chief of Security, so they’ve spent pretty much their whole lives shut up in their giant mansion and know practically nothing about the world outside. Of course, they sneak out the first chance they get and are promptly kidnapped, to be sold to a shady gang called the Masks. Their worried parents hire three detectives with supernatural powers—called the Ear, the Eye, and the Arm—to find their children, and the detectives proceed to chase the kids, who are in turn chased by their kidnappers, all over the city. They have so many near-misses it would be ridiculous, except this book is so awesome you kind of want it to keep going.

This is, at heart, a coming-of-age story about Tendai, where he finds his own courage, and nearly all the characters discover or rediscover something about themselves through the course of their adventures. For all their quirkiness, the people in this book are easy to relate to, with very human problems no matter how weird they are. But what I thought was most unique and interesting about this book is the way they seamlessly blend the Africa of the future with African mythology and the tribal heritage of its past.

Plus, there's a talking blue monkey. So there. 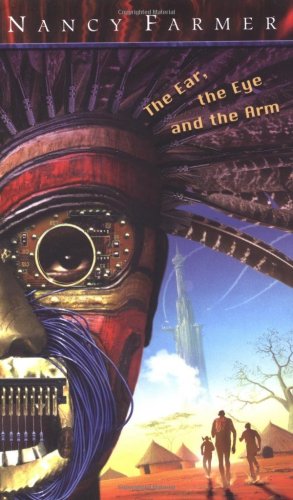