Favorite Quote:
“Raids, bullets, crime... no problem. A missing duster? Crisis."-The Last Sacrifice
"If we stand for nothing, we'll fall for anything." -All Time Low

This tale is of a boy, Holling Hoodhood, living during the time of the Vietnam War. His father is a contractor and practically demands that Holling follows in his foot steps. Just to add on, his 7th grade teacher absolutely hates his guts. Worst of all, he has to spend every Wednesday with the torturous Mrs. Baker.

The story starts out in September. Holling Hoodhood starts out his first day of 7th grade and finds that his teacher automatically openly despises him. As he put it “Mrs. Baker hated him more than Mrs. Sidman hated Doug Swieteck.” Doug Swieteck practically tortured Mrs. Sidman last year. He started out with things like spraying deodorant all in her desk drawers and then tried the dreaded #6 on her. #6 included something with Wrigley's gum, the teacher’s water fountain, and the Polynesian Fruit Blend hair color Mrs. Sidman used. How could she hate him more than that?

That day, Holling goes home looking for an ally. His mom is no help at all. She thinks there is no way that Mrs. Baker can hate Holling’s guts on the first day. Then, he goes to his dad. He gives no helpful advice. He is only aggravated that Holling interrupted Walter Cronkite. Then he goes to his sister fore advice. This was as Holling said,” Like asking Nova Scotia into war”. She suggests that since Mrs. Baker hates his guts, he might try getting some. After this, he ends up cleaning and organizing every Wednesday for a while. Every day he went home his father would ask him how his day was, because if he mad Mrs. Baker might not choose Hoodhood and Associates as the company to remodel the new sports emporium, and Holling would say, “Just swell”. He never complained through all the boring cleaning. He did have some problems though. Mrs. Baker’s rats, Syrocuse and Caliban, had been sitting in filth for a while and their cage was desperate for cleaning and he had been assigned that awful duty. While cleaning they escaped.
In fact, one day the cafeteria chef made cream puffs for the Wives of Vietnam Soldiers. To earn one, he had to pound out all the erasers from the teachers that had put their erasers in the box that Mrs. Baker passed around. He had pounded all them out then realized that the window next to the cream puffs were open. He ran up to see that the cream puffs had a thick layer of white atop them. This was sadly not powdered sugar, but chalk dust. He was in so much trouble! Then, Mrs. Baker came in and said he could have one. He ate a bite and practically gagged. It was gritty and positively vulgar! Then his routine changed.

Mrs. Baker stopped the organizing and handed him a book. It was The Merchant of Venice by William Shakespeare. He was convinced that she was trying to bore him to death. Then he started reading it. He learned that Shakespeare was not meant to bore, but could be interesting. Next he read “The Tempest”. He liked “The Tempest” more than the last book. He practiced all the curses like “The red plague rid you!” or “Toads, beetles, and bats light on you!” Unfortunately, none of the curses were on the 150 question test.
He also had to worry about getting twenty-two cream puffs, because Danny Hupfer and Meryl Lee Kowalski had found out that Holling had gotten a cream puff. That is three weeks worth of allowance. How was he going to score that? Even worse, his sister and his father are butting heads over everything. His sister is convinced she is going to save the world. His father is dead set against her doing anything she plans on doing. Whether it be becoming a “flower child” or anything of the subject. Everything is crazy! He goes to Goldman’s Bakery to get 22 cream puffs when he is $2.80 short. He later finds out that he can get those cream puffs when he’s $2.80 short, because the baker is a big Shakespeare fan. Getting the cream puffs was easy. Consuming them was the problem to be found later. The rats ate the cream puffs while they were sitting in the Coat Room. Danny and Meryl Lee still insist that Holling owes them. This is also when Mrs. Baker shows that “mercy is not strained”. She bought 22 cream puffs for the class. Then, trouble is found. He learned he has to play Ariel the Fairy in The Tempest. After an amazing performance, Holling goes to get a baseball bat signed by Mickey Mantle, who turns out to be a snooty, mean, arrogant man who won’t even sign a baseball bat because it is after the time he is supposed to leave.
Later he finds out that he is seen flying on the stage, in his yellow costume with white feathers on the butt, in the paper. Then he sees it all over the middle school. It later travels to the high school. This is horrible for him and his sister. Mrs. Baker assigns “Romeo and Juliet”. He reads it and hates it. He thinks Romeo is a jerk and Juliet is stupid. Meanwhile, it is February meaning that Valentine’s Day is coming up. He is sweet enough to ask Meryl Lee. He buys her a rose and a Coke. They talk about everything. From Shakespeare to Holling’s dad’s architecture plans for the school, who happens to be in the running for the job against Kowalski and Associates, to anything else. Meryl Lee showed the picture that Holling drew and Meryl Lee’s dad stole the idea. Hoodhood and Associates still got the job, but Holling and his dad were on uneven ground.
After some time, Holling’s father bought a Mustang and his sister got a boyfriend. He hated Chit, Heather’s boyfriend, and would not let him park his VW Bug in the driveway. Heather and her father were at such a disagreement that Heather left with Chit to go to California. She later refused to get in the car with hairy, hunched-over Chit and he left her in Minneapolis. She called and told Holling that is would take about $45.00 to get to New York and don’t have any money. He asked his dad to help and he refused. His mother was too worried to do anything. Holling cashed in a bond and sent $ 50.25 to Heather Avenue for his sister. He later went to the train station by himself to pick her up. His sister may have not found herself but she found him.
Mrs. Baker got a letter that made her heart soar. It was from her husband, Lt. Baker. “SWEET EYES STOP OUT OF THE JUNGLE STOP OK STOP HOME IN TIME FOR STRAWBERRIES STOP LOVE TY STOP” was what the note said. Holling said that “Shakespeare couldn’t have written it better”. The whole class went on the class camping trip with Mrs. Sidman and Mrs. Baker on the last week of school. There were some difficulties along the way, but at the end, happiness was finally found.
I wouldn’t have changed a thing about this book. Yes, it was slow at times, but it made you feel like you were experiencing all of the pain and happiness personally. This book was wonderful in my opinion. I thing to enjoy it you have to understand how things were at the time and how hard it was. I loved how the author used humor and sarcasm to lighten the mood, but still had a very serious tone. You knew what was going on and you saw how it affected people. In some realistic writing pieces you only pick up on what was happening at the time. When reading pieces like this, I don’t just want to know what was happening but how it changed life. I would absolutely recommend it. 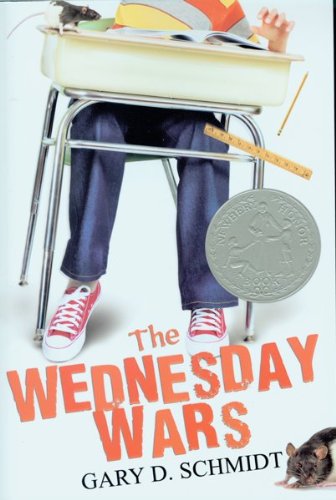