Nightlight: A Parody by The Harvard Lampoon | Teen Ink

Nightlight: A Parody by The Harvard Lampoon MAG

A parody of the bafflingly successful novel Twilight, Nightlight hits the nail on the head, summing up four novels of mediocre writing in one fantastic comedy.

Belle Goose, the main character, didn't want to move to Switchblade, Oregon. But, she had to so that her co-dependent mother could go traveling with her boyfriend. After saying “Good-BUH,” Belle takes her one-way trip to her father's.

Jim, a window-wiping vegetarian, is clearly the father in need as Belle takes on the task of babying him – making him pot roast, urging him out of the house to hang out with his wheelchair friend.

Struggling with the fact that every male in Switchblade is in love with her, Belle heads to school in her U-Haul truck – to meet the man of her dreams. Edwart Mullen and Belle Goose are meant to be together. Well, according to her. Edwart is much more concerned with his Price Elasticity Club and normal names. With his chronic mantra of “Beware contagion, contagion alert! Edwart and Purell are stronger than dirt!” Edwart is dragged into Belle's fantasy of their eternal life together. She wants her inhuman boyfriend, and she will get him, no matter what it takes. “Edwart Mullen of Switchblade, Oregon, is a vampire, but don't kill him because I love him!”

Though he suffers constant nosebleeds caused by Belle, Edwart dates her under one condition: “Promise me, you won't ever buy Sega products. I can't always protect you from men who try to sell you Sega.” Edwart is also relieved to find that Belle does not think he is a robot, like most of the students.

Love Twilight? Then this book is good for a laugh. Nightlight attacks the plot in the best way possible: through humor. Be warned, Bella's counterpart may leave you with a bitter taste after her spew of conceit. Also, Nightlight is a grand exaggeration of everything wrong with Twilight.

Hate Twilight? You'll love this. It's an excellent parody of what all those girls have been screaming over. If you haven't read Twilight, read this. It's loads more amusing and productive than the thesaurus of words Stephenie Meyer threw together. Nightlight is a glorious comedy and more than worth the read. Great job, ­Harvard Lampoon 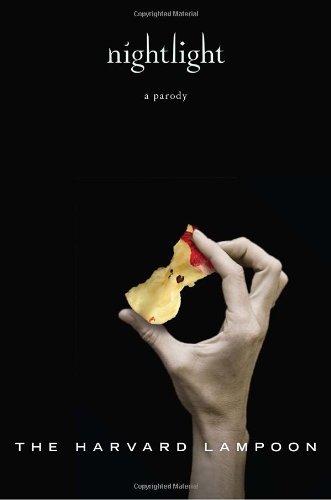