As teenagers, we think about what matters to us, such as grades and what people think about us. But in the Gone series, the teenagers in the town of Perido Beach have their days of being a normal teenager taken from them. These teenagers now have to deal with a life that has no adults, a life where it’s a constant battle for survival, and a life where the battle between good and evil is always present.

Lies is the third book in the Gone series. They’ve been trapped in the FAYZ for months now and are still learning to deal with this new reality. But the thing that keeps you reading is the suspense.

At the start of every chapter there is a time, a number in the countdown. While you’re reading the book you have no idea what this number is counting down to. It draws you in and makes it so it’s impossible to put the book down. As the number gets lower and lower, it makes you wonder more and more.

What would you do if there was speculation that a person you thought was dead was back? If you looked up to see that the town was on fire? The events in this story build suspense like no other. They’ll make you want to keep reading.

Lies is an amazing third book in the Gone series written by Michael Grant. I’d recommend it to anyone who likes a suspenseful, action packed novel. 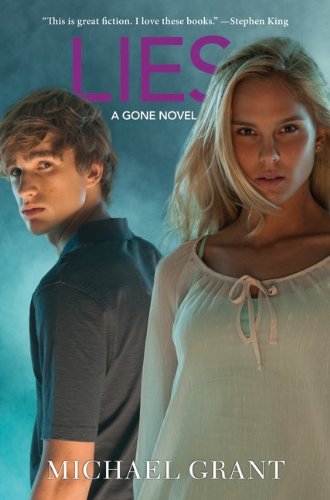 Favorite Quote:
Now It's Time We Fight Like Men! And Ladies. And Ladies Who Dress Like Men. FOR GILGAMESH, ITS MORPHIN' TIME! - Gilgamesh