A Rumor of War | Teen Ink

A Rumor of War

It's not often that I stay up late at night reading a book. It's even more uncommon to see me reading a book, late at night, during summer break. Its just not one of those things I do. This summer was not the case though. I was up until at least 1 o'clock in morning for four nights straight reading the book A Rumor of War. A memoir of the Vietnam War, A Rumor of War tells the tale of Lieutenant Philip Caputo and his journeys throughout a war that claimed 58,226 American lives and over 1.5 Vietnamese civilians. Throughout the book, we see how Caputo was transformed from an average 17 year old kid, into a bloodthirsty killing machine.

Caputo first entered the Marines in 1960, enlisting in the Platoon Leader's Class in Virginia. After graduating the class, he went to another basic training camp where he learned how to execute basic maneuvers. After he finished this and completed college, he went on his three years of active duty. About two months later, he and his battalion were deployed to Danang, Vietnam. This base would serve as the headquarter for the war efforts. From the day he got to Danang to the day he left, he was in survival mode. His battalion would be deployed into the bush for weeks at a time. They were told to patrol, to find, and to kill. There was no wrong you could do. As you would imagine, these instructions ended up altering his thought, causing him to kill civilians, burn towns, and torture enemy soldiers. Throughout the book, we also find out that Caputo serves many jobs, including the Marines Corps cornier. He also has a run in with the law. Throughout the book, we see him transform from the first page to the last.

I have to say that this was the best book I have ever read. I would say my opinion does have a certain degree of biasness though, because I have always been interested in the Vietnam War. On a five star scale, I would give this book a five out of five. Caputo painstakingly re-creates a picture of how this war must have been. The words he uses to describe his surroundings are excellent. This is a book that anyone who has ever been interested in wars should read. 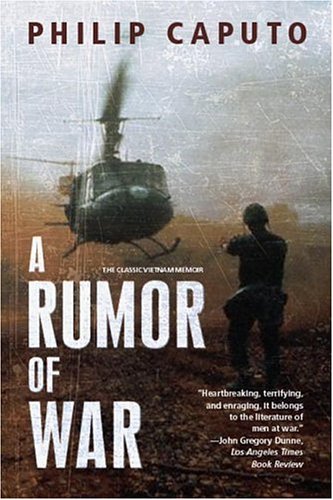