Favorite Quote:
"Are you cereal?"

Rumrunners. Murders. Ruben Hart witnessed it all, and now he is telling someone. And that someone is David Peterson. This is just a brief glance into the ever thickening plot of the historical novel Black Duck. Janet Taylor Lisle did an amazing job mixing mystery and intrigue into a plot that will suck you in and keep you there.

Black Duck is about two boys who find a mysterious dead body washed up on the shore. It is in the days of Prohibition, rumrunners and bootleggers are the talk of everyone’s lives. The two boys search the body, finding only a tobacco pouch and a pipe. They take these items and report the body with no idea that it is going to disappear. Ruben and Jeddy have a fight over if they need to report everything to the police and their friendship falls apart. Before long, Ruben and Jeddy’s sister, Marina, are making some very dangerous company, and the choices they make will change their lives forever.


This book is told in two ways, in the present and in the past. The present is when a teenage boy called David Peterson is interviewing an old man about his life. The old man just happens to be Ruben Hart; when he tells his story it takes you back in time to when Ruben was a young man.


Janet Taylor Lisle did an amazing job in telling this story. She made the characters interesting, and made it so that the reader feels like they are in the book. Janet Taylor Lisle did an amazing job of telling the real life story of Prohibition in a semi fictional setting, so that the reader begins to understand the full complications of the rum running business and those involved. This book talks a lot about how right and wrong aren’t always just black and white, many times there are shades of gray to through into the mix.


All in all, I think that the book Black Duck by Janet Taylor Lisle is an amazing book, even if historical fiction isn’t always the readers’ favorite genre. 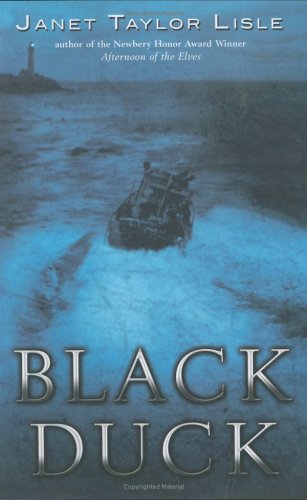