Favorite Quote:
Yesterday isn't ours to recover but tomorrow is ours to discover

“Sunshine, you’re my baby and I’m your only mother. You must mind the one taking care of you, but she’s not your mama,” Ashley’s mother told her before police officials at all once unwillingly tore them apart from each other. In the book, Three Little Words, Ashley vows to herself that she would not love or treat anyone who wasn’t her birthmother as a mom. Three Little Words, a memorable and thrilling novel, is unmistakably 100% worth your time.


Ashley grew up in a loving family, but was surrounded by irresponsible people who were often in and out of jail for various crimes. While trying to follow the “rule” for nine years in foster care, Ashley is tossed from one home to the next like a hand me down toy. All the while, she clings onto the hope that the two of them would someday live together again. Soon, everyone always tells her, trying to brush off the subject, whenever she asks about her mom’s whereabouts. With unpredictability in each day, and foster parents that could send her back with one phone call, Ashley struggles, even trying acting up by being naughty. She endures hard times, including withstanding cruel abuse from a horrid woman who was, “as wicked as a fairytale witch,” and trying to not let that destroy her. Scarred by the loss of a loved one, Ashley is afraid to let herself warm to another person. Nevertheless, when the Courters appear, a patient loving family, who would like to adopt Ashley as family, she gets emotionally confused. Two sides inside of Ashley battle each other as she struggles to figure out how she truly feels for the couple. She is on shaky ground, and doesn’t want to be hurt again by abandonment once she feels very close to them. In spite of this, she senses that this family just might be different than all the others. Could it be possible, that no matter how much to resist by telling herself that she doesn’t, that she does actually love them after all? More importantly, will Ashley ever put all her past events aside, let her mother go, and risk giving love another chance in her life?
There were many things that I loved about this book. Firstly, the author did a fabulous job of making the events in the book seem so realistic that I felt like it was a movie playing right before my eyes. The descriptions of Ashley’s actions were clear, and they were very detailed. Also, the titles of each chapter were very enjoyable to read, and I loved them because they were very clever as well as full of voice. For an example, the book starts with the first chapter title as, ‘The day they stole my mother from me.’ Last but not least, I loved watching Ashley gradually mature from the beginning to the end. It was like watching a newborn bloom wonderfully into a grown adult right before your eyes.


Often, when you hear of a recommendation about a memoir, the first thing you will do is think about how boring it will be. In fact, that's not a lie. You will read memoirs and true stories, biting your tongue just so you can stay awake, to read the book. Unlike other memoirs, you won't even notice the difference of this book being based on a true story. Some of the events that take are so crazy that you think it can't possibly be real, but that's what makes this book much more unique and extraordinary than others.


Three Little Words touches on the bonding love connections between a mother and a daughter. It’s about learning to love, taking chances, and growing up. For the first book someone has written, I think it’s quite impressive how the author managed to create such an addicting book. Started as an essay, I couldn’t have been gladder that she chose to continue writing about her life, thus creating the book.
However, like most things in life, there are always some negative points to everything. Some things that I would change about this book revolve around the title, Three Little Words. I think the whole story would have been more of a legendary novel if the words had been chosen differently because the actual three words turned out to be a little let down. Although this is a fantastic novel already, if I were the author I would chosen different words, and ended with them, creating a big BANG~! Even so, the ending was very satisfying, so the hunger of curiosity in my mind was able to rest after completely reading this book.


Three Little Words, a memoir by Ashley Rhodes- Courter, had me literally reading for hours at a time. Once I had opened to a page, my hands refused to be detached to the book. It had me sucked in to all the action from beginning to end. Unexpected events, one after another, kept the pages turning. Some were hilarious, some had me gaping, some brought tears to my eyes, but all had me interested. This touching novel will move you and give you a new perspective on an orphan’s life, from a primary source, the author herself. Three Little Words, a fantastic nine out of 10, is a heartwarming, overwhelming, moving book that you will always remember.


In conclusion, Three Little Words is a must read for all young adults. “You are my sunshine…” Those are the four words, in which Ashley will always remember for the rest of her life. So what are you waiting for? Grab a copy of this novel at a nearby library or bookstore, and give it a try. It can’t hurt…. And you won’t regret it! So, I’ll end it with my very own set of three little words… Dare. To. Read? 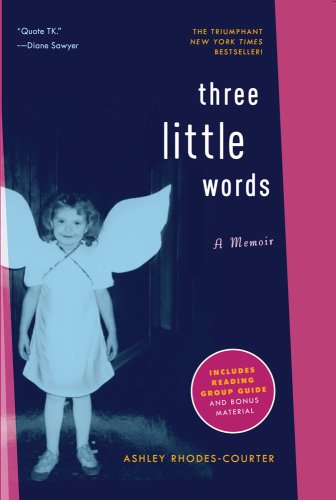 Favorite Quote:
Yesterday isn't ours to recover but tomorrow is ours to discover

View profile
thankkk you guyss!!!! :)
Ladekeye BRONZE said...
on Mar. 6 2010 at 9:43 am
Ladekeye BRONZE, Cambridge, Massachusetts
4 articles 0 photos 15 comments
View profile
Great Job on your review. they were both so great you got BOTH published