The Magic Thief by Sarah Prineas

Connwaer doesn't know his name, his age, and has no home. He wandered the streets, pick pocketing, until Nevery, a wayward wizard, stumbles upon him, and he takes him on as his apprentice. Now living in a world full of magic, (and schools!), Conn must also find his magic stone, and help Nevery find the reason the city's magic level is declining. Chock full with mystery, character development, and suspense, The Magic Thief will be a light and predictable read for you. This description shows the sub-par writing of Sarah Prineas. The Magic Thief, the first in a trilogy, may not be the perfect book for you.
As I said before, Conn lived in the slums of Wellmet. One day, he picks the pocket of a cloaked man, and finds himself a glowing stone bursting with light. The man turns around, asks for the stone back, and takes the boy to a chophouse. The cloaked man, who introduces himself as Nevery, explains that the stone is a locus magicalus, a tool used to focus magic into beams of pure energy. The stone's power should have blown Conn of the face of the Earth at the touch, but he didn’t, and he sparks an interest in Nevery. Conn becomes the new apprentice of Nevery, and is exposed to a new life, facing and overcoming challenges that I listed before. To become a real apprentice, he has to find his own locus stone, which surprisingly imitates. Overall, the plot of this book isn't that great. You can predict the end midway, and other books use this plot more effectively. But, it's still enjoyable.
I thought The Magic Thief, by budding author S. Prineas, wasn't strong in some ways. Even though I enjoyed reading it a little, I wouldn't pick it up again. One of my few favorite parts are the characters. Conn's character developed so much, throughout the book. The perspectives were good also. The story is told through the eyes of Conn, so you can see his thoughts. On the other hand though, Nevery never expresses his thoughts to Conn, so his diary pages are placed in between chapters. Whenever a chapter ends, you can figure out more information. The plot of a lonely, poor, and powerful kid transitioning into a magic world and adapting to life has been better used by J.K. Rowling. And for a magic novel, more than 3 spells should be mentioned!!!

Throughout the book, one of the things that Prineas does well is convey a theme or message. It may seem a little straightforward though, but what I got out of it is: Your past can never decide who you are. The boy starts out with nothing, but then he finds his potential to become a great wizard. I also got this: You can be whoever you want to be and can prove it to anyone. Nevery starts to lose faith in Conn, but then he starts showing promise that he really can become a wizard by proving himself. There could probably be many more of those themes, but these, to me, are the most important.
If I were to recommend this book to anyone, I would probably hand it to a 4th grader. The length and difficulty were too low for my age. Although if I were younger, I would have probably enjoyed it more. It lacks the depth that more challenging books include, and younger children don't need that depth as much as older kids, so they don't make it as powerful. The criminal is obviously caught doing notorious work in the first half, which ruined it for me. I ran across this book at a book fair, and picked it up because it looked interesting. If you like fantasy and you're 10 and under, you should read it. Therefore, I would give this book a 2.6 lock-picks out of 5 . A 3/5 would be possible if each of the aspects I talked about would be improved by a tiny bit. Because of this book, I will not read the sequel, Lost, and I probably won't read the third installment
In conclusion, The Magic Thief by Sarah Prineas was below average. The author could have made it longer, and had some more spells. Reading about how Conn made biscuits each morning got BORING after a while. As I see this book, there needs to be more depth as well. The book isn't bad, it isn't good, but it isn't easy, and isn't hard. Starring a boy whos life changes forever, The Magic Thief will be just be another book to take up your valued time!! 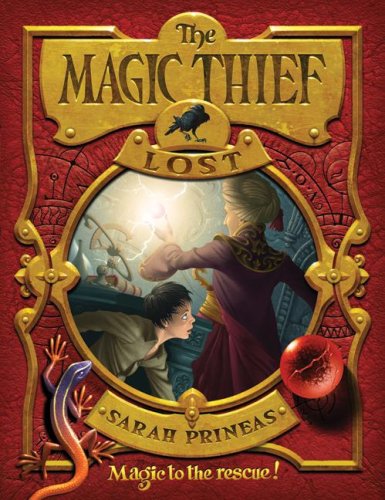