Never Have Your Dog Stuffed: And Other Things I Have Learned by Alan Alda | Teen Ink

Never Have Your Dog Stuffed: And Other Things I Have Learned by Alan Alda

I defy any person who might read this article to present to me another nineteen-year-old girl of today's generation who knows exactly who Alan Alda is, everything that he has done, and some of the more intimate particulars of his life. The second and third, of course, are direct results of reading this revealing, enchanting, humorous, inspiring, thoughtful autobiography, although to be fair, I have been watching reruns of MASH since I was seven years old. To me, there has always been something amiably magnetic about Alan Alda. Whenever he is on screen, even if he is not talking, I can't help but pay attention to him. I used to have this recurring dream where Bob Eubanks would drag me onto a game-show sound stage and build me a family out of the Nick at Night and TV Land line-ups: Lucille Ball was more often than not my mother; Mike Brady my father; Sophia Petrillo my grandmother; Jessica Fletcher my Aunt; and my brother was, nine times from ten, Hawkeye Pierce: a.k.a Alan Alda. Flash forward about ten years and suddenly I'm presented with ample evidence that Bob Eubanks had good taste.

Up until the publication of this memoir, Alan Alda, like most celebrities, had been condensed into a tiny, little slice of knowledge limited to what audience members have slowly been picking up on since we returned to Korea twenty years after the fact. Now --- or rather five years ago when the book was published, but I digress --- he is literally an open book. We already knew he was funny - but did you know he literally grew up in the wings of the vaudville stage, keeping company with th likes of Red Buttons, Rags Ragland, and Rose LaRose? We knew he was spontaneous - but did you know he enticed a male friend to do a veiled striptease in a room of drunken sailors? We knew he was loving - but did you know he has been married to the one true love of his life for over half a century? We knew he was passionate, but really .... we didn't know the half of it!

The son of a talented vaudville and motion picture actor and a mentally unstable mother, Alan Alda (born Alphonso D'Abruzzo) was born into a little, tiny, private world of show-business, which he would one day leave in favor of a bigger, wider, more personal world of show business. He was a cosmopolitan before he could talk; an advertising model before he could talk; and a writer and performer before he knew there were any other options. Yet still, as the reels of life were rolling, Alan Alda took his fair share of shots from the civilian world: illness, loneliness, bullies, poverty, religious indecision, near death experiences, family troubles, and that constant presence of uncertainty that stalks the shadow of every struggling actor. He has been a slave to his own obsessions time and time again. He nurtured a nonsensical professional rivalry with his father for most of his life. He was almost stuck like a pig inside the walls of a Salt Lake City prison. --- I'm not kidding.

But no matter what obstacle life threw in his path, Alphonso D'Abruzzo never stopped fighting: he kicked and scratched and clawed his way to keep his head above water time and time again, all in the name of his heart's desire. He knew what his passions were, he knew what he wanted to do, and he knew it would be a battle, but he didn't care, because in his heart h knew there was really no other option for him. Alan Alda is many things: he is a writer, director, scholar, philosopher, teacher, inventor, reader, father, husband, son, brother, and friend --- but he is also an actor.

The only problem with this book is that now, of course, I think I'm some kind of authority on actors. Two weeks ago, during the Golden Globes, my mother made some kind of comment on how the actors never stayed in their seats during the commercial break, and I whipped around and said: "Well, of course not, mother, how could they? They're actors; they have to perform; they don't sit still in front of an audience, even if the audience is other actors; they're not like us civilians." Alan Alda has created a monster. lol.

Oh, and as far as lessons go, there are many to be found within the pages of this book, the most important of which being, of course, to never have your dog stuffed. 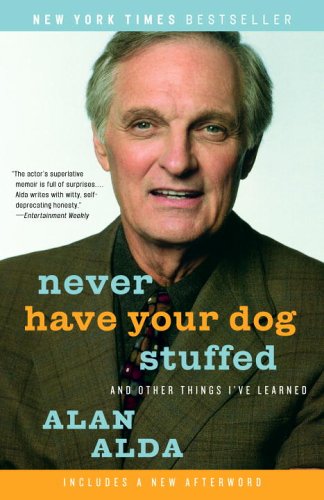 
Buy from Amazon
The author's comments:
I can't watch the last episode of M*A*S*H because Alan Alda always makes me cry.
Post a comment
Submit your own