If a man is the sum of his actions, then what is he if heperforms no actions? What happens when more people consume than produce? What arethe implications of the mindset that simply because one breathes, one is entitledto just as much as the next person? These questions and more are answered in AynRand's Atlas Shrugged. Set in the mid-1900s, this is a thrilling novelthat, through a logical course of events, illustrates the extreme dangers of acommunistic society. Written in the third-person, the novel follows the lives ofseveral characters, especially Dagny Taggart, a vice president at a majortranscontinental railroad. The country is being bled dry by people whodon't produce and who take from those who do. People have forgotten therelationship between productivity and reward. Communistic behaviors prevail asfar as the eye can see. The only ones keeping society from collapsing arethose who are hated most - the producers. Their pride and responsibility areinspiring, but even they have limits. As more resources are squandered throughstupidity, the government tightens restrictions on production, with Dagny andother powerhouses taking the brunt of it. The more that is destroyed by thestupid, the more that is demanded of the intelligent. Curiosity andexasperation eventually lead Dagny to investigate a man named John Galt, whom noone seems to know anything about, but who may hold the fate of the world in hishands. During the course of her search, there are enough twists and turns to keepone interested. The ending instills a sense of bliss, to say the least, and iswell worth reading the entire book. I recommend Atlas Shrugged to anyonewho can read, and the audiotape for anyone who can't, or won't. At 1,168 pages,it will take a while to finish, but the sense of purpose you gain from this bookmakes every minute well spent. Perhaps the most interesting aspect of the book isthat it was written in the 1950s, yet we can already see in our own societyelements of the future it portrays, a future that chills my bones. 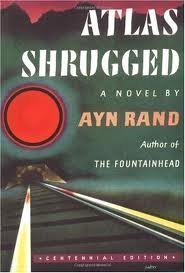