The Power of Five by Anthony Horowitz | Teen Ink

The Power of Five by Anthony Horowitz

“The Power of Five”, or “The Gatekeepers”, as it is know in the US, was first published in 2006 by Scholastic, Inc. It is a series by renowned author, Anthony Horowitz, also known for his bestselling “Alex Rider Adventures” and “Diamond Brothers” mystery novels. In this series, which currently carries four books, five teenagers from around the world, known as the gatekeepers, use their supernatural powers to save the Earth from destruction by the Old Ones, who are the origin of Lucifer and demons and the Devil. Anthony Horowitz's novels usually have suspense, but with these books, he shows that he can travel outside his normal range of books and show his true colors as an author- colors which he has displayed with great beauty.

In the 1980s, Anthony Horowitz wrote the “Pentagram” series, which has the same basic plot as “the Power of Five.” This was the author's first attempt at the Science-Fiction genre, and it ended up failing greatly at the time. Anthony continued writing after he wrote the fourth book in the series, but he never did release a fifth book that would have been the conclusion of his “Pentagram” series. His next big break was not until 2000, when his bestselling “Alex Rider” series saw its beginning with “Stormbreaker.” Anthony has since come out with multiple books each year and has become more popular than ever. His success grew in 2005 with the release of “Raven's Gate.” When asked about why he rewrote the “Pentagram” series instead of just finishing it, Horowitz said that he wanted to modernize his characters and plots, and he wanted to bring the whole series back when doing that. The readers were very anxious to see what the results of this book's release would be, when the last try at the same genre had been a big flop. Apparently, though, many of his avid readers went to local bookstores to buy the book the day it came out. The book showed up on bestsellers' lists all over the world and the author was proud of his great triumph. The author had tried just once more, as did Edison with the light bulb- thousands of ways to be wrong, but he needed only one way to make it work—and he had exceeded beyond his largest expectations. There were three books that followed “Raven's Gate”, and they were “Evil Star,” “Nightrise,” and “Necropolis.” Each of these books also topped the charts, showing Horowitz's great literary victory.

One of the most appealing things of the series to the younger readers, and even into the teen readers, is the compelling characters and storylines. Anthony Horowitz uses every possible opening in these books to give a little background to his supernatural characters, like Matt Freeman, the first gatekeeper to learn of the prophecy of the five as well as the leader of the gatekeepers. The author tells the full story of this character's parents dying from different angles all throughout the series. Horowitz gives so much detail as to these fully developed characters' past that it can make the reader feel as if they were really meeting these characters in person, as if the characters themselves are real. He has a sort of fatherly essence towards these children as if they were his own. The author's own children, Cassian and Nicholas, have played major roles in inspiration for their father to write this series.

In the latest book, “Necropolis”, Anthony Horowitz's biggest challenge was not coming up with a story that lived up to the high expectations set by the three previous novels, but to create a kind of character he never had before- a main character that was a teenage girl in today's society. In the original “Pentagram” series, the role of the fifth gatekeeper was in fact a teenage boy. Anthony Horowitz said that this character was his biggest challenge in a long while. Scarlett, the new character, is a girl who was adopted at a very young age, like the rest of the gatekeepers. She had to be really tough, like the boys, but she also had to hold some aspect of the modern teenage girl within her personality. First time readers of this series and author would never have guessed that this was the first time that he had made a book that revolved mostly a round a female character.

Anthony Horowitz is an author and screenwriter. He's written series such as the Alex Rider books, and he's even had a movie made out of the first Alex Rider novel. It's pretty clear that he's an accomplished author, but the only way you can know if he was truly amazing is by reading his books. He's written fifty, and the books' genres range from teen spies to mysteries, to, of course, fantasy. There's an Anthony Horowitz book out there for everyone, you just have to do a little looking! 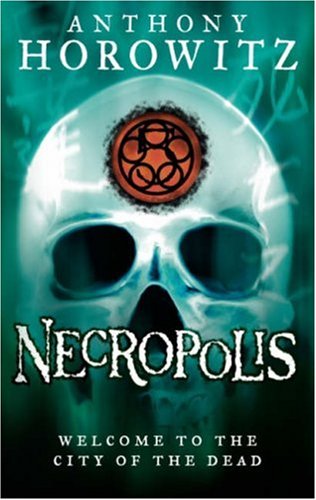