I read because it’s a nice way to escape reality. When you read, you don’t have to worry about what’s going on in your life, or what’s going to happen next. You can just slip off into another world and think about the characters in the story and the things that are happening. In the Ted Dekker book, Renegade, you literally travel to an alternate reality.

The story takes place in an “Other World” as Dekker calls it. This world is filled with two types of places – the desserts and the forests. At one time all of the creatures lived in peace, and green lush forests covered the world. Their creator was Elyon, a god of love and peace. Then the evil Shataiki (a bat like creature), Teelah, came and wiped out the forests. Now, in the desert lives the Horde, monsters pained by a scabby skin disease that covers their bodies, and alters their minds. In the forest, lives the forest dwellers, the followers of Elyon. They must bathe in the water from the forest’s lakes every day to prevent themselves from getting the disease. There is something even the forest dwellers and the horde cannot see. That is the world of the Roush, furry, kind, white creatures, and the Shataiki, evil, black, bat-like beasts. None of the people can see the Roush or the Shataiki – except the four chosen ones.

In the first book, four warriors are chosen by Thomas, leader of the forest dwellers, to go on a special mission. They are sent out into the dessert. While they are out there, they are sent on yet another mission – this time they are sent by the Roush. The Roush ask the four – Johnis, Silvie, Darsal, and Billos – to find the Seven Books of History. With these seven books, history can be rewritten. If Teelah acquired the books, he would use them to obliterate the forests. The books hold great power, and even touching them with blood can almost lead to certain death. The four set out to find these books in both Chosen and Infidel (prequels to Renegade). Along the way, they acquire three books, and they bring home Karas, the daughter of the Horde high priest. She bathes in the waters and becomes a good friend of the four.

As the story continues in Renegade, one of the four – Billos – steals the books. He decides to touch the books with his blood, in search of power. Once he does so, he is sucked into the books, into a land in between earth and the other world; however, the books disappear with him. Billos finds himself in a place called “Paradise”. He meets a sketchy man named Black, who gives him the power he has been thirsting for all along. Black commands Billos to find him the books and to kill everyone in the town. In Billos’ thirst for more power, he does as Black commands, no matter whether Black is good or evil.

Meanwhile, the other three realize he had disappeared. Darsal – who was in love with Billos – sneaks off in search of Billos, kidnapping a Roush and accidentally bringing along Karas. The Roush tells her where to find the fourth Book of History and heads a warning along with it. They travel through the desert and into the black forest, where Darsal sells her soul to Alucard, an evil Shataiki, in turn for the book. After they leave the forest, she is forced to use the book, after they become trapped by Horde. In turn, Darsal, Karas, and a Horde guard are all transported into the alternate reality.

You may have forgotten about the other two chosen ones – Johnis and Silvie. Once they notice Darsal is missing, they go searching for her. With the direction of a Roush, they go into the Black Forest, where they become trapped. There is no way out, and they are surrounded by thousands of Shataiki including Teelah himself. It seems impossible for the two to escape. How could they?

Well you’ll have to read this fantasy book to find out. This tale is most definitely a fantasy, for a few reasons. For one, there is an obvious separation of good and evil in many circumstances – forest dwellers and horde, Shataiki and Roush, Elyon and Teelah, the list goes on and on. Also, there is magic involved. People travel to different realms through books, and use” super human powers”. There is also talking creatures that are only visible to certain people; these types of creatures don’t even exist on Earth. However, there is one big reason that this story is categorized as a fantasy. Obviously enough, they live in a completely different world. In my mind that definitely qualifies this as a fantasy book.

Although I often don’t read fantasy books, I really enjoyed this book. I read this series because it was recommended by a friend. Once I began, I just couldn’t put down this tantalizing read. I liked it for a few reasons. One reason is that there was no “damsel in distress”. It seemed as though the girls could stand up for themselves. Also, it’s interesting how differently the characters react to certain situations and how they react to each other. I liked the way the author described certain things, because the concept of an alternate reality is hard to imagine, but it was easy to follow and made the story more interesting. It was fun to escape to the land of the Forest Dwellers and the Horde for just a little while. It was interesting to watch the plot of two different stories unravel at once. But who am I to tell you. Find out for yourself. See if Billos ever makes it back to the other world. See if Johnis and Silvie make it out alive. Read if Darsal can save Billos from his evil thirst for power. Read Renegade by Ted Dekker. 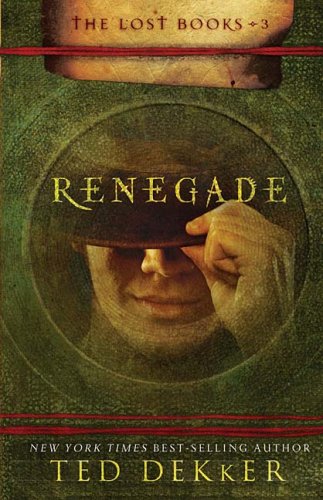