Everyone knows about the Darwin Awards, the awards given to people who kill, or nearly kill, themselves through acts of stupidity or idiocy. As compiler Wendy Northcutt describes, the awards "commend those individuals who ensure the long-term survival of our species by removing themselves from the gene pool in a sublimely idiotic fashion."

Themes include animal mishaps, criminal mistakes, military idiocy and sex. These bizarre stories range from someone getting their arm bitten off by a tiger to a robber sleeping on the job, to dying from too much deodorant.

The book is divided into sections, each with an introduction full of opinionated, funny comments containing every stereotype. In the section "Macho Men," Northcutt says that some men have what she calls the explosive stupidity gene that prompts them to act macho and blow things up, inadvertently hurting themselves.

In a section on animals she says, "What's dumb for a human is not dumb for a dog. If a human stuffed his head into a potato chip bag to scarf the last scraps, we laugh at his suffocation, but for a dog, the death is just sad." Comments like these make this book humorous.

The only downside might be the repetitiveness of some of the stories. Some might conclude this is a twisted collection that only freaks would enjoy. I admit that you probably need a bit of sick humor to appreciate The Darwin Awards, since lots of the stories are at the painful expense of others, but really, lighten up! 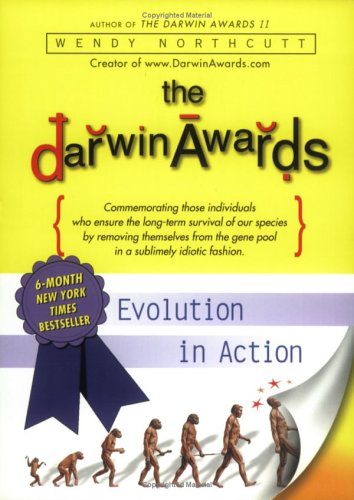