A Confederacy of Dunces by John Kennedy Toole | Teen Ink

A Confederacy of Dunces by John Kennedy Toole

This is not a new book. It was written in the sixties and published in the eighties. The only real occasion for this review is that I am reading it now and feel compelled to spread the word.

In the literary community, the story behind A Confederacy of Dunces is a bit of a legend. In the late seventies the novelist Walker Percy—then teaching at Loyola University in New Orleans—began receiving phone calls from a woman unknown to him. She insisted that her son had written a great novel, and that Percy must read it. Her son, the mysterious John Kennedy Toole, had written the novel in the early sixties and left the manuscript under his bed, believing it unfit for publishing. When Toole committed suicide in 1969, Ms. Toole discovered it. Percy eventually agreed to read the manuscript—and discovered that this truly was a great novel. It won the Pulitzer Prize for Fiction in 1981 and has since become a classic.

But, of course, it’s the story within the text that makes A Confederacy of Dunces really remarkable. The narrative follows Ignatius J. Reilly—an obnoxious, obese, arrogant but ultimately brilliant man—as he ventures through 1960’s New Orleans. A self-proclaimed Medievalist, Reilly’s central belief is that his entire society—the eponymous confederacy of dunces—is out to ruin him. The police, the government, capitalists, filmmakers, bowlers and students—all constituents of the confederacy.

The book takes its title from an essay by 18th century satirist Jonathan Swift: “When a true genius appears in the world,/ you may know him by this sign, that the dunces/ are all in confederacy against him.”

Over-educated and totally effete, this thirty-something-year-old genius lives at home with his mother, where he spends his days gawking at the horrors of modern television, consuming vast amounts of pastries, and slowly composing a “monumental indictment upon our century” in the Big Chief tablets that litter his bedroom floor. But, when his mother runs into some steep bills, Ignatius is forced into the work force. Hilarity ensues as he confronts the bizarre world of work, romance, and family from which he has tried to remove himself.

The confederacy is colored by an amazing array of characters—namely, a vagrant, a policeman, and a businessman—all equally odd and hilarious. The sections of the book come to focus on their different stories, with Ignatius at the heart of it all. Ignatius himself is exposed largely through his journal entries and passages from his manuscript.

John Kennedy Toole’s style is marked by obsessive but endlessly practical characterization. He spends little time with romantic description and instead uses dialogue and internal monologue to move the story and develop its characters. And though Toole clearly has a gift for sentence-construction, he never sacrifices form for function. The result is a stunningly well-developed cast of utterly original and hilarious characters.

At end, A Confederacy of Dunces is an enjoyable and brilliant ride. You’d be a dunce to ignore it. 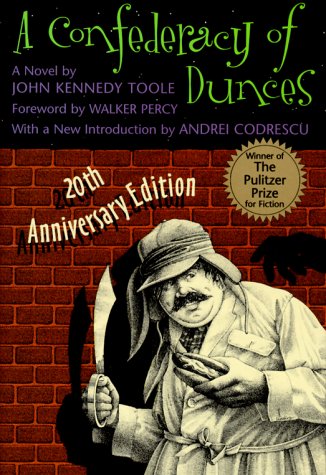