I picked up this book on a 50-cent rackbecause I thought the cover was interesting. Two hours later, I stoppedreading with great reluctance.

This is the diary of a young drugaddict. Published in the 1970s, it details Alice's (as we know themain character) descent into the underworld of drugs and her emotionalstruggle to escape her addictions. It's a revealing and incrediblyhonest book, at points almost painfully so. It's great, but alsofrightening.

Alice is not a derelict or an orphan; she is thedaughter of a respected middle-class couple. She is not introduced todrugs by a bum on a street corner; she gets a soda that's beenspiked with LSD at a friend's home. Her first experience withdrugs and how it leads her deep into that world is vividly described.Finally, an horrific experience while under the influence of marijuanaconvinces her to get clean, but she has a hard time. The descriptions ofAlice's experiences are extremely detailed, the good as well asthe bad.

Although this book has some content that would beinappropriate for younger teens, it's good for high school kids.If you are even thinking about doing drugs, or have a friend who istrying them, read this book! It'll turn you off drugs for lifewhile giving you a fascinating and compelling read at the same time. 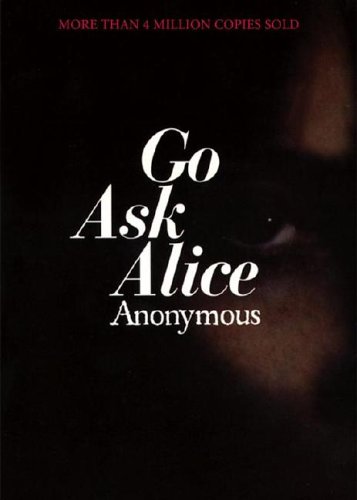 Favorite Quote:
"Nothing of me is original, I am the combined effort of everyone I have ever known." -Invisible Monsters

I love this book. However, the main character's name isn't mentioned. Alice is the name of a girl she meets in the book and asks her something(I believe it was the day or time). The movie also called the main character Alice.

It glorifies drug addiction for a while, then sends everything she just told you crashing down. Definitely one of my favorite books.

lovely-nights BRONZE said...
on Aug. 6 2009 at 9:39 pm
lovely-nights BRONZE, Holland, Pennsylvania
2 articles 5 photos 3 comments
View profile
"Go Ask Alice" was recommended to me by a friend and once I started reading, I couldn't put it down. Its captivating and well-detailed story that sheds an honest light on the world of drugs. I love, love, loved this book, and recommend it to anyone in the mood for a good read.

xoxo, Amber Ã¢â„¢Â¥
kochab said...
on Jan. 26 2009 at 9:30 am
I have read this book and have found it very intriguing for years. Just recentlly I found out that the entire book could have been fabricated fiction put together by the woman that published it. I still believe that it is a great read and that it offers many looks into a teenagers life and many real world situations that they could have to face.

I do NOT however, believe that this book will "turn off" someone from experimenting with drugs just because of the situations that the antagonist has to go through because of her drug use. The descriptions of things that she feels on her drug binges in fact may just spark curiosity in the minds of young readers as the author is very vivid and descriptive of the things that the antagonist feels while on mind altering substances.

Never less, I believe that this book is a great read and worth picking up a copy to check into.