With the incomparable eloquence and casual wit that defines her as a significant voice of the twentieth century, M.F.K. Fisher’s posthumously released work, Last House, chronicles her reflections on life in 68 essays written between 1943 and 1991.

While Fisher is known primarily as a food writer, these pieces span a variety of topics including “the difference between dawdling and waiting,” being strip-searched at London’s Heathrow airport, the difficulties of caring for an elderly father and, of course, her love for gastronomy. On the surface, the memoir entertains bittersweet memories of American life in her beloved “last house” in St. Helena, California.

At the core of the work is the heart-wrenching honesty with which Fisher describes the transition to being elderly, particularly her battle with Parkinson’s and her ensuing loss of hearing, sight, and speech. She describes this deterioration, writing, “I cannot read what I have just written, so that I cannot in turn even finish this sentence.”

Because of Fisher’s limited ability to write in the final years of her life, Last House becomes abstract and droning in the second half, in great contrast to its lucid and vibrant beginning. Fisher, however, deserves to be lauded for her bravery in writing about death as it happens.

Last House is both a graceful farewell and a self-written eulogy: the crowning achievement of Fisher’s long and prolific literary career. 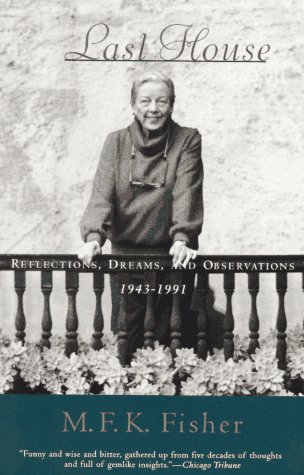