The Hitchhiker's Guide to the Galaxy by Douglas Adams | Teen Ink

The Hitchhiker's Guide to the Galaxy by Douglas Adams

Would you like to know the Answer? The answer to Life, the Universe, and Everything? Or better yet, how about the actual question? The Hitch Hiker's Galaxy by Douglas Adams can give you that and more. It tells the tale of Arthur Dent, who escapes Earth just seconds before it's destroyed by hitching a lift on a Vogon constructor fleet with his not-of-this-world friend that hoopy Ford Prefect, a roving researcher for the Guide. They meet up with President of the Galaxy, Zaphod Beeblebrox and Trillian, formerly Tricia McMillan in the stolen spaceship the Heart of Gold and with the help of the Improbability Drive, travel through hyperspace in search of the Ultimate Question. It also tells the story of “a wholly remarkable book”.

“Not only is it [the Guide] a wholly remarkable book, it is also a highly successful one–more popular than the Celestial Home Care Omnibus, better selling than Fifty-Three More Things to do in Zero Gravity, and more controversial than Oolon Coluphid's trilogy of philosophical blockbusters, Where God Went Wrong, Some More of God's Greatest Mistake, and Who is This God Person Anyway?

“The Hitch Hiker's Guide has already supplanted the great Encyclopedia Galactica as the standard repository of all knowledge and wisdom, for though it has many omissions and contains much that is apocryphal, or at least wildly inaccurate, it scores over the older, more pedestrian works in two important respects.

“First, it is slightly cheaper; and second, it has the words DON'T PANIC inscribed in large friendly letters on its cover.

So before you blast off, be sure to remember your Hitch Hiker's Guide, avoid Vogon poetry at all costs, and never EVER, forget where your towel is. 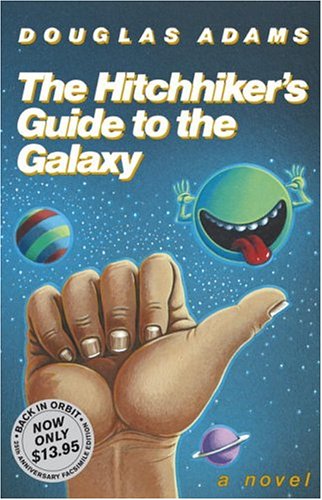 
Buy from Amazon
The author's comments:
This my favorite book ever, in fact, it is the first book of favorite series ever. So read it. I mean-please read it...or else.
+++ZERO+++
Post a comment
Submit your own

Lol I LOVE that book, I read it too.  It's all just so ridiculous that it's good.  And you had a really funny review.:)

Btw, will you check out my work and comment on it?