Gideon’s Trumpet is a book written by Anthony Lewis, who was a New York times columnist and was a prominent writer in the field of legal Journalism. It provides the details of the landmark case Gideon vs Wainwright.
Clarence Earl Gideon was a poor man accused of stealing from pool room. A witness claimed that he had seen Gideon carrying a bottle of wine and some cash.
Gideon ran away from home when he just 14 and since then he was involved in many minor criminal offences like robbery, Burglary, larceny.he was the prime suspect of this crime also.
In this first hearing Gideon asked the court to provide him legal counsel as the constitution of United States says so. But the court refused as Florida law provides counsel for people indicted for capital offences only. So Gideon appeared in the court alone without a counsel and defended himself. Nevertheless, He was found guilty and imprisoned for 5 years.
So Gideon filed a writ of Habeas Corpus to the Supreme Court of Florida. He pleaded that not providing counsel was violation of constitution but again the Florida court rejected it. Next, he wrote to supreme court of united States and the supreme court resolved that , it was fair to provide Mr. Gideon a counsel. The 6th amendment of United States, states that “ in all Criminal prosecutions the accused shall have the assistance of counsel for his defense”.
1932, In a case called Powell vs Alabama, few African American boys under 21 were accused of raping 2 young white women. This was first time U S Supreme court properly addressed the Rights of accused. a source States that “ This case is famous for mandating that under 6th Amendment counsel be provided to defendants charged with felony in state courts regardless of the defendants ability to pay. Nonetheless this was the case only when the convicted were sentenced to death. These young boys in this Powell Vs Alabama case were indeed sentenced to death. A decade later however question was raised whether counsel should be provided to people in non capital cases. This was dealt with by the Supreme Court in a case called Betls V Brady.
In 1942, A poor farmer called smith Belts was accused of Robbery and he requested for counsel as he was not able to afford one. But the state court refused , He later petitioned to supreme court, but supreme court also denied stating that assigned counsel was not required for indigent defendants in state felony cases except when there were special circumstances like illiteracy or mental Challenges. This decision was over ruled in the Gideon V Wain wright where Gideon’s state provided Counsel who later became Supreme Court Justice argued that “There could not be a fair trial in criminal case without counsel and that citizens uneducated in legal matters cannot properly defend themselves in the Court of Law”.
We can find a similarity between this ruling and Kantian principles about the basic human dignity. People, just because of the fact that they are human beings, even if they commit any kind of atrocities like murdering must be provided some basic rights. So why can`t it just be when the crime is not so atrocious or when its petty?.
And later in Miranda V Arizona case where a man called Miranda was accused of raping and kidnapping a women was sentenced to 20 years imprisonment but this decision was over ruled emphasizing the right to remain silent as fifth amendment suggests “that no person shall be compelled in any criminal case to be witness against himself nor be deprived of life liberty or property without due property of Law”.
The consequence of Gideon V Wain Wright were profoundly felt.
1. There was a change and improvement in public defender system.
2. Many poor people were able to access defenders, consequently they were subjected to fair trial.
We just cannot imagine how many people without legal knowledge or those who have been wrongly accused by other would have been convicted. On the headstone of Ms. Gideon it is inscribed, it is actually a line from his letter to United States Supreme Court “each era finds an improvement in law for benefit of mankind”. And Gideon’s attempt did really change the US legal system.
Above all this is a great book to acquire legal knowledge. This book deals with the case at length providing all the details of justices involved, convict’s background, previous cases which were base for the ruling. It’s a must read if you want to know about the land mark judgement that changed one of the worlds powerful legal system.
By
Alexandria Minakshi. 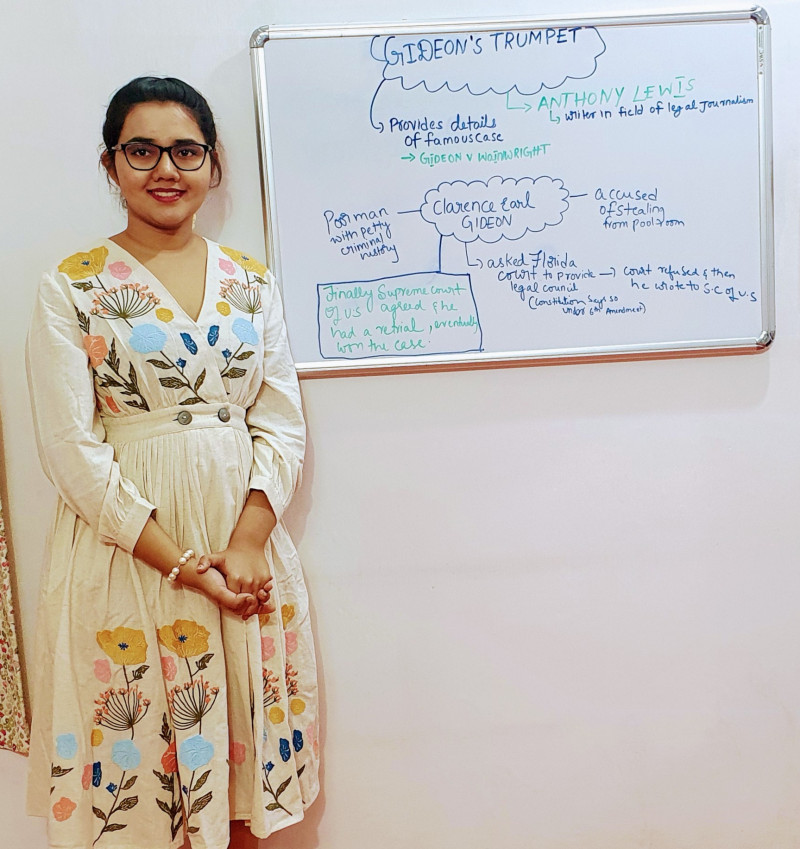 “each era finds an improvement in law for benefit of mankind”