When Dad Goes to Prison MAG

The plastic orange chair creaks beneath me. The friction of my jeans makes my skin itch. Other kids my age prance around playing tag. I sit patiently with my hands resting under my thighs, occasionally bobbing my head from side to side, humming to my favorite tune. The cold concrete floor and these four walls have become my second home.

Looking to my right, I see my reflection in the two-way mirror. Through the chipped paint I see the beady brown eyes of an officer staring back at me.

A voice behind me, ravaged by too many cigarettes, begins to call out last names. When I hear my family’s name, my two brothers, sister, step-mother, and I spring to our feet and head to the visitation area. Goose bumps dot my skin. I rub my arm, hoping they will disappear.

Panes of glass separate us visitors from the inmates; we’re divided into sections with a leather stool and a black phone on either side. My family packs in like sardines. My step-mom wipes down the phone, sanitizing it. She sits on the stool, pulling my youngest brother onto her lap. My sister, other brother, and I stand off to the side.

His face lights up. He settles on the stool and pulls a silly face at my little brother, who giggles. The phone passes among my siblings every couple of minutes. I feel Dad smiling at me, but I can’t meet his eyes.

I always knew about his crooked occupation. Growing up, I would find massive bags of marijuana and white powder hidden around the house. I didn’t think anything of it. I enjoyed that I had enough toys to fill a school, wore name-brand clothes, and got to ride to school in a Range Rover with a TV inside. These things were normal to me.

When I spoke to my friends about all of this, their response was never a gasp or an uncomfortable glare. They would just say, “Yours too?”

TV portrays drug dealers as menacing tough guys – thugs. My dad is more like a giant teddy bear. He’s the most generous guy ever. Everyone knows him, and if you need help he is always there.

“When my parents were on drugs bad, your dad helped me pay to get them out of jail and helped keep my little sister cool,” said my dad’s ex-girlfriend. “He even paid their bills.”

That was the problem. He looked out for everyone except himself.

“He has always been a very loving and caring person,” said my grandmother. “Always pleasant to be around. I think he saw himself as a black sheep in the family.”

Enjoying the spoils of his livelihood lasted only so long. One fateful day, my opinion of my father’s lifestyle changed. That day my step-mom came rushing down the steps, panicking, holding the phone as she chanted, “Robbed. He was robbed.”

Being a child surrounded by a plethora of toys, I quickly forgot her distress – until the door opened and a creature limped in. His blackened eye was swollen, and his leg and arm were entwined in gauze. I couldn’t move or speak. Clutching my toy, I turned to my brother. He was frozen, like me, with his eyes locked on this creature. By the look on his face I could tell we were thinking the same thing: Who is this monster?

“Sup, Licia.” The creature smiled at me. The voice sounded rough, but overall, it belonged to my dad. He limped closer. I stepped back. My brother and I ran to our grandmother, who took us out of the house. I was five.

From that day on, whenever my dad appeared outside of the house carrying a black bookbag, I got chills. I’d imagine everything that could go wrong: He’d get robbed, jumped and left for dead, or shot and dragged onto the porch for all of us to see.

“I got to the point where I couldn’t raise my kids like that,” said my dad’s ex-girlfriend. “They deserved better. I didn’t want them to grow up thinking this is how life should be.”

The first time my father went to jail, it felt like my heart had been ripped out of my chest and thrown in the road. My fear for him intensified. On visiting days, he would smile and joke around through the thick glass, but his eyes told a different story of his life inside.

The third time around, emotions flew through the family like birds. It had been two years since we had stepped into that prison. Seeing the thick concrete walls and orange chairs again sent an unpleasant chill through my body, but watching my little brother cry as he grasped the black phone made me so sad.

We shouldn’t be here. Again.

I sat in a front-row seat watching my father slowly lose himself. It was like watching an addict. The word “jail” no longer provoked fear; instead it came with just a shrug. My dad’s palms itched for money, and selling drugs was the only way he knew to get it.

“I know he didn’t want to sell drugs,” said his ex. “I saw it in his face. I always told him, ‘You have to strive for what you want.’ He has the ability to do good; he’s very smart. He just didn’t know when to stop.”

My dad broke down many times, telling me, “I can’t do this anymore.” But with a growing prison record and five kids to support, finding a legitimate job was a problem.

“I got turned down by everyone,” said my dad. “I had a couple of jobs, but I could never keep one. With no father, it’s hard to learn how to be a man.” Unfortunately, he could only find jobs that paid minimum wage.

Nearly 6 million people –  a majority of whom are people of color – would rise from poverty if Congress raised the minimum wage to $10.10 an hour, according to thinkprogress.org. The national minimum wage of $7.25 per hour is unconscionably low. My father couldn’t fathom going from thousands of dollars a day selling drugs to just a few hundred a week working a minimum-wage job. The federal minimum wage has not increased since 2009, while the cost of utilities, food, transportation, and other essentials have steadily risen, according to CNN. Recently, thousands of low-paid workers have protested across the nation, seeking a raise to the minimum wage. Meanwhile, a bill proposed in 2013 by President Obama to change the minimum wage to $10.10 by late 2016 languishes in Congress.

“He was twenty years old and still in high school, though he had a very high IQ,” said my grandmother about my father, who later got his GED. “He was just there for the socializing.” He tried many times to further his education, but his “job” always got in the way, landing him in jail when he should have been cracking the books.

Black males in Pennsylvania have a 60 percent graduation rate, according to blackboysreport.org, while 85 percent of white males graduate. However, the graduation rate for African Americans has risen three percentage points in the past three years, according to The Journal of Higher Education. Slow, but still an improvement.

“If there was one thing I could say to my younger self,” said my dad, “it would be to follow your dreams and stay on your path. Don’t listen to all the negative things that people say about you.”

It’s been two years since I set foot in that cold prison. I see the fear in my dad’s eyes every time he talks of his future. He knows the world is already set against him. 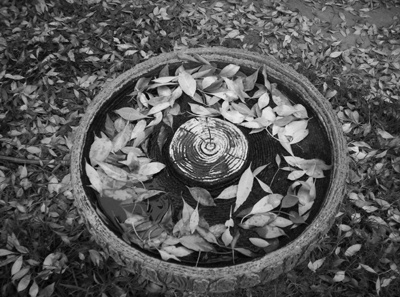