The public schooling system is supposed to be, in the eyes of many contemporaries, an institution in which intelligent individuals can hone an array of skills. This noble pursuit is being trampled on organizations who do not have the best interests of the students in mind. This organizations, sometimes spanning multiple continents, have almost limitless resources and will stop at nothing to gain the hearts and minds of the next generation of adult workers and consumers. What am I referring to? The answer is a simple word: corporations. With only the profit-motive in mind, many businesses (ranging from regional companies to global behemoths) have infiltrated the public education system. This steady corruption of the education system has its beginnings as old as the system of factories and corporations itself. It continues to this day, with millions of young minds at risk. In order for the public education system to achieve a level of respectability and prowess that it could, corporate influence must be eradicated from it.

The late 19th century saw the public education system, itself still young, being influenced by corporate agents. The factory system was spreading in the United States. Managers needed a constant supply of labor. Specifically, labor that would be complacent and manageable. They descended upon the public school system in search of this labor. Using stopwatches and keeping endless data, a powerful system of indoctrination was devised. Do you remember the constant ringing of bells signaling the beginning and end of classes? It is no coincidence that both schools and factories have well-regulated periods of works and breaks. Factory owners realized that young children could be taught how to follow orders, under the guise of becoming a productive member of society. However, very few students actually became deep thinkers or powerful minds. Most were swept away under the wings of corporations, who used and abused them until they were no longer fit to work, at which point they dumped them (without any skills, remember) on the street. It was a concerted effort to keep a steady flow of labor coming year after year, generation after generation.

Large corporations have not stopped their influence. Under the passage of No Child Left Behind, signed by President George W. Bush, many public schools are required, by law, to attend “conventions,” where they must spend federal aid on educational products. At first glance, it is a harmless requirement to connect schools to useful products. However, these educational “tools” were proven to have no effect on student learning. However, the makers of the products could not have cared less. These facts were only discovered after the products were bought and paid for with federal aid that could have greatly improved schools across the nation. Politicians did nothing about it. After all, who are the chief proponents behind elections? The same people who can spend millions of dollars to elect a certain candidate. You guessed it: corporations. They elect politicians who will force schools to spend money on their products, thereby allowing them to perpetuate the cycle of corruption of both the political system and the public education system. All of this is done in the name of profits, the sole goal of businesses.

The idea of a corporation conflicts with the idea of a public school. A corporation is a hierarchical system that involves performing specific tasks as given to you by someone higher up on the “ladder.” However, the education system should exist to produce critical and individual thinkers. The type of people who can analyze a situation or conflict and have a personal opinion based on the facts. But individual thinkers do not fare well in large corporations, where they are buried under the decisions of others. A modern corporation could not survive the possible power a true free-thinking population has to offer. It would collapse as people realize the false power a corporation has, which is directly derived from both the worker and the consumers. Those two groups are a result of the public education system. Therefore, it makes sense for a corporation to do all it can to mold workers and consumers into subservient drones. The profits are much higher than when people begin to question the corporation on such “pesky” things like human rights around the globe.

Corporate influence and the public education system cannot co-exist. One, a powerful profit-driven entity, cares little for the well-being of others. The second is meant to be an institution that provides each and every citizen the right to be able to analyze the world around them, in order to make conscientious decisions. You might as well as a lion to sleep in the same den as a gazelle. Soon enough, the lion will begin to use the gazelle for its own gain. Corporations act similar. They devour any hint of free-thinking that would hinder their attempts to gain as much market power as possible. Citizens that can question and think are gazelles with speed. They can run from the lion, preventing it of any power. But corporations prevent that by infiltrating the very systems that have the possibility to create citizens able to evade the clutches of corporations. As long as it continues, we, as a nation, will be paralyzed under the grip of corporations who continue to lock us into the vicious cycle of worker and consumer. 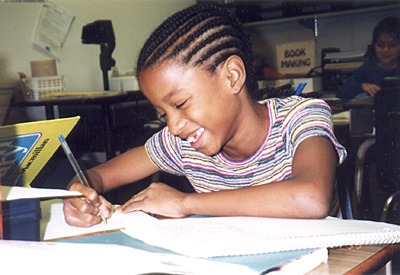