Teens with Tattoos: Rebelling or Expressing

“Painting and tattooing the body is a return to animalism.” -Johann Wolfgang Von Goethe. “Tattoos are like stories-they're symbolic of the important moments in your life.”-Pamela Anderson. Tattoos are becoming more commonly seen in our society today. They are seen on many celebrities and everyday people of all ages. Despite their growing popularity people have mixed feelings about tattoos especially when it comes to a teenager having them. Some people see it as a self-expressive art form while others see it as a rebellious immature act that will one day be regretted.


Tattoos on teenagers are a growing trend that has some adults concerned. These adults often worry about the health risks that are associated with tattooing. Also some adults perceive teens with tattoos as having an image that is rebellious, immature, or unprofessional. Another common argument against teens getting inked is that the decision might one day be regretted since styles change over time and a design that a person likes when they are an adolescent may not a still appeal to them when they are middle aged. Despite these arguments some teens still feel that a tattoo is a form of art that expresses ones individuality and uniqueness. Some tattoos also have a deeper meaning behind them and stand for something that might remind someone of an important event or person in their life. When a tattoo has a special meaning that stands for something close to a person’s hart it is more than just an ink stain on their skin.

It is impossible to understand why a teen would get a tattoo and what it means to them without actually asking a teen who has a tattoo. I talked to two eighteen year olds with tattoos, Ashley and Cara, to get their opinions on their own tattoos. Ashley’s tattoo is her dance studio’s slogan and she said that, “My tattoo has a meaning to me because it represents all the years I spent dancing at that studio and all the things I learned there and all the friends I made there. I don’t regret it and I see it as a way to express myself.” Cara said that “My tattoos have meanings, one is my camp name and my other tattoo says ‘dad’ which is dedicated to my dad and how much he has done for me. I would never regret either of them, and they’re both an extension of who I am.” When asked if their parents were on beard with them getting tattoos Ashley said that, “At first my mom wasn’t happy with me wanting to get one but after talking about it she realized how important it was to me and was fine with me getting it.” Cara said that, “My parents didn’t care about me getting them and my dad even encouraged it.” Cara also wanted to add some advice for teens thinking of getting a tattoo saying, “I feel that most people should wait awhile before their tattoo. If you still want it in a year then get it then.” These examples of coarse are only two teens and other teens may get a tattoo for other reasons, like fitting in, it would seem that a tattoo with a significant meaning is less likely to ever be regretted later in life.

According to studies about 10% of teenagers in the U.S. have a tattoo which is a significantly higher number than it was ten years ago. Even with so many teens having them, some people still view getting tattoos as a dangerous and rebellious thing to do. The American Academy of Child and Adolescent Psychiatry released a statement in 1999 which listed tattooing as a possible form for self-injury. One of the reasons that teens getting tattoos are sometimes thought of as rebellious is because many parents don’t wish for their child to get a tattoo. Since in most states it is illegal for minors to get tattoos without their parent’s permission a teen who wants a tattoo but whose parents won’t let them get one, to go to an illegitimate tattoo artist. This is where tattooing becomes very unsafe because if a tattoo is done by anyone other than a trained, legal tattoo artist then the person might not follow the safety rules enforced at a legitimate tattoo parlor. Getting a tattoo done by someone who isn’t a professional is a risky idea that can result in diseases and infections. It seems like a much better idea to either get a parent’s permission or wait until turning eighteen to get a tattoo even if that means having to wait awhile before getting a tattoo.


Tattooing can be considered a permanent and slightly painful art form or a senseless ink stain. Everyone has their own opinion about teens getting tattoos but at the end of the day the opinion that really matters is the teens because they are the ones that are going to have to live with their tattoo for the rest of their life. 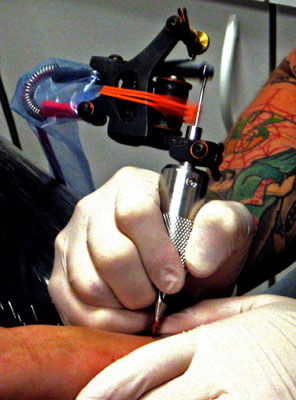