Grow Up Heather, Bulimia Is SO '87

Favorite Quote:
‘Art is meant to comfort the disturbed and disturb the comfortable.’ -Unknown

In 2017 after the release of television show Thirteen Reasons Why, many people everywhere claimed that releasing such a program with teens as the target audience would create a trend of mental illness, due to the suicide of the main character. Everyone thought that the show made it seem like suicide was an option and a way to solve things, and that the copycat suicide which took place near the end of the first season would make other teens do the same.

Mental illness glamorization is when mental illness is made out to be poetic, cute, edgy, fashionable, or some badge of bravery if you have it. While media has been featuring more characters who struggle with such things, some things incorrectly portray the problems and end up sending the wrong messages, indirectly telling people that depression or suicide is something to be strived for. This very thing has been noticed happening on television and in movies, causing controversy and posing the question of whether or not this has caused a Domino effect of teens self-diagnosing with depression, and cutting their wrists or purging their food to be like the characters they’ve watched on screen. And this thing many people feared is now correct.

First, mental illness is being glamorized and made fashionable or edgy by merchandise or apps being sold on the internet. In 1962, a Barbie was released which came with a scale permanently set to 110 pounds; a dangerous weight for a girl who was crafted to be seventeen years old. In addition, she came with a book titled ‘How To Lose Weight’, and when flipped over it reads ‘Eat less!’. Shirts have been sold on Amazon which have Nirvana singer Kurt Cobain’s suicide note printed on them. On Urban Outfitters’ online store, a shirt with the word ‘depression’ printed all over it was retailed, but has since been taken down due to massive backlash. An app dedicated to aesthetic stickers has pastel, cutesy options but among them are stickers saying ‘Kill yourself’ and, ‘I feel hopeless again’, and pill bottles, and nooses, all made pink and cute. Another app sold on Google Play store called ‘Sad Wallpapers’ has wallpapers which are plain and black or gray, with white phrases on them like ‘I don’t feel sad, I don’t feel anything’. This is making sadness an achievable aesthetic rather than an issue. YouTuber Sarah Hawkinson made not one, but three videos on mental illness merchandise. In the description section of her first video, she said, “This stuff just grosses me out.” She then went on in her video about how depression, bipolar disorder, and anorexia are all being made into a fashion statement by such clothing being created.

Continuing, the film and television industry glamorizing mental illness or incorrectly representing the issue have created copycats. The classic hit movie ‘Heathers is a dark comedy about a high school. One of the most popular girls in school, Heather Duke, has bulimia. In the beginning of the film, she’s bent over a toilet while her even more popular friend, Heather Chandler, says, “Grow up Heather, bulimia is so ‘87.” Even though the movie actually does touch on how things like suicide attempts can become trends amongst teens, the movie doesn’t retain its original message or dark humor because of the Columbine shooting that happened a few years after the movie’s debut.

An ABC TV show called ‘Red Band Society’, showing the lives of characters all living in one hospital, features a character named Emma who is anorexic and very slender. It shows her pretending to gain weight, by stuffing her bra with coins and water loading, which is where you drink lots of water in quick succession so you’ll put on weight temporarily. Besides her slim figure, there’s no other outward indication of her extreme anorexia. A normal patient will dress in layers because they’re always cold, or have bluish fingers and yellow-tinted skin. Emma’s hair isn’t thinning or falling out, and she’s not having any heart or organ problems to the audience’s knowledge. She’s not disgustingly thin with sunken eyes and an alien-like facial structure. Her teeth aren’t falling out from possible purging, and there’s no messes in her bed from excessive laxative abuse. In order for the program to show the disorder as an issue, it has to show the disgusting, gross things that happen when anorexia and bulimia take hold of a patient. There should be shots of her puking, her hair coming out in clumps, her growing downy hair all over her body due to constant low body temperatures, cleaning up the aftermath of abusing Metamucil. But it only shows her, at most, being dizzy, and getting upset when she eats food. It’s basically a guide for girls who have or now want anorexia.

In addition, the representation of a facility for people with disordered eating is extremely bad. Emma is allowed to eat alone, brush her teeth alone, be weighed with clothes on, drink water alone, change her clothes alone, bring her calorie journal to the eating area, and go to the bathroom alone. This is not what would happen. Patients who have anorexia must clean off a certain amount of their plate, and if they refuse, they have to drink a protein shake or Ensure. Some of the rules are so specific that if a patient wants to drink their Ensure over ice, they have to eat all of the ice, too. If you need to use the bathroom, a nurse or attendant goes with you. They either stand in between the door and doorway, or shut the door but make you sing or count so they know you’re not purging. Patients are normally weighed with either underwear or no clothing on, because they can sneak things into clothing to weigh more. On the show, at a party, two girls come up to Emma, saying they’ve never seen a size triple zero in the flesh and want to take pictures of her and be just like her. Familiar? The show makes eating disorders just seem like a thing you can do with no real effects on both you and those around you.

Jay Asher’s novel ‘Thirteen Reasons Why’ about a teenage girl who commits suicide, leaving behind tapes explaining why she did, was adapted into a show on the popular movie network Netflix. Shortly after its release in 2017, two teen girls and one 26-year-old man committed suicide. The girls are heavily believed to have viewed the program, and the man left tapes following his death, replicating the manner in which the show’s main character died.

Last, but most definitely not least, is that social media platforms monetize blogs, pages, and websites which are pro-mental illness or make out mental illness as beautiful. Tumblr is a popular blogging website made for people to find communities with like-minded users. However, there are many blogs dedicated to people cutting themselves, drug abuse, and eating disorder ‘progress’. Another website called ‘myproana’, although it claims not to support or condone eating disorders despite its name, has forums chock-full of many young girls asking each other good alternatives to toothbrushes to gag themselves so they can throw up their meals, or women posting photos of their extreme weight loss and getting encouraging comments from other users, telling them to keep going.

Another case of monetization of disorders like these is the case of popular beauty vlogger and YouTuber, Eugenia Cooney. Eugenia began her YouTube career in 2011 as a young adult. Viewers noticed was that she seemed incredibly thin. In her most recent video, the comment section was flooded with concern, because her weight has dramatically decreased. People are convinced that she’s had anorexia. In response to this, 20,000 people signed an online petition to get her temporarily kicked off YouTube because her content is clearly garnered towards children and teens. It never happened. She still gains money from her content now.

Many may argue that it’s better to be shedding light on such issues because it used to be taboo and now people know that they have resources. However, there is nothing wrong with talking about matters that are taboo or estranged in society. It is when serious things are taken to the extreme that it becomes problematic. For example, think about all the open talk of gay marriage and pride marches. That’s alright. But there are people who take that open-mindedness to the extreme and begin thinking that deplorable things like pedophilia are or should be acceptable. Headlines have been made about extreme left-winged people who are protesting that pedophilia should be considered a sexual orientation, just like homosexuality, and shouldn’t be discriminated against. How can one compare consenting adults to someone mentally ill abusing a child or minor? It’s not a fair argument, and it makes gay people look bad. Similarly, people who are making depression seem like it’s funny or edgy become the face of the issue, rather than those who truly struggle from the illness. There is absolutely nothing wrong with talking about things that, in reality, need to be discussed. But there is something wrong with perverting the beauty and freedom of being able to talk about it.

Teens are cutting, purging their food, and withdrawing from social events now more than ever. Many people might say, “It’s because kids are always on those phones!” It’s not the phones. It’s what they see on their phones, computers, and televisions that is making them attempt to be just like their favorite characters or bloggers. Girls dance around like their favorite Disney princesses as children. Boys pretend to be the superheroes they have posters of on their wall as kids. But now they’re eating salt and ice like Emma Chota of ‘Red Band Society’, and purging their food like Heather Duke of ‘Heathers’. 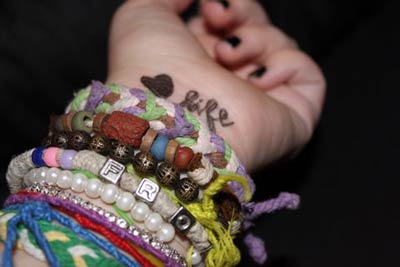 This is becoming an increasingly large issue among young people. We've went from crackle nail polish being a trend to eating laundry capsules, and now to being depressed. Things have gotten darker and more perverse as each year comes and goes, so we need to talk about it before more people lose their lives to these dangerous trends.