Blood, Guts, and the Tantalizing Thought of Aestheticizing Violence Being a Good Idea | Teen Ink

Blood, Guts, and the Tantalizing Thought of Aestheticizing Violence Being a Good Idea

Boom. Boom. Pow. A large gush of blood comes spurting out of one enemy’s chest; but there is no halt, no pause in the action: another two are already coming out of a nearby house, blood dripping from their mouths. I turn swiftly and fire. Boom, headshot. Bang, bang, bang. Both are down, and quite dead. However, suddenly the display flashes red and blood starts to drip down the screen as my character falls to the ground and proceeds to be eaten— clever zombie, sneaking up like that up from behind.

This is a common scene from practically any of the action-packed, shoot-em-up video games out on the market right now (minus the zombies for some, of course). Many people are worried about this aestheticization of violence, and if it might be affecting the minds of teens in a negative way.

And not just video games; computer games, phone applications, TV, and movies are all aestheticizing violence. Much of the populace views this as a bad thing, and I used to as well: until I really slowed down, and took some time to think about it. Aestheticizing violence isn’t making violent acts beautiful or portraying them in an appealing manner; it is simply letting the viewer or reader be more aware of the brutality taking place. Furthermore, it allows us deeper thought and insight as to why the bloodshed is occurring.

Take, for example, the movie Inglourious Basterds. It’s a fantastic movie by Quentin Tarantino, a director who is quite notable for his use of large amounts of blood and gore in his films, and Inglourious Basterds was no exception. However, the bloodshed in the movie (and, in fact, all of his movies) is utilized in order to portray a point more clearly, and make the events have far more significance.

Also, take a look at the book/movie A Clockwork Orange. It is an obscenely violent novel and film, full of rape and murder. However, without such terrible events transpiring, Alex’s (the main character) redemption by the end of the book would not be nearly as significant as it is, and the lessons that lead to this ultimate recovery would not have been possible to learn.

Even in video games, such as Left 4 Dead 2, where there is less, but still a substantial amount of blood and gore, the fighting is used to portray a sense of urgency, which is rather crucial to its storyline and to a zombie-survival game in general.

In all of these, I’m not trying to preach that violence is good; I’m merely attempting to convey that it can be utilized to widen the breadth and depth of human emotion, thought, and ideals for the viewer. And if that is a problem, then I’m pretty sure that there is a far larger fight to pick; such as with anybody who has contributed in any way to humanity over the past century. Boom. Boom. Pow. 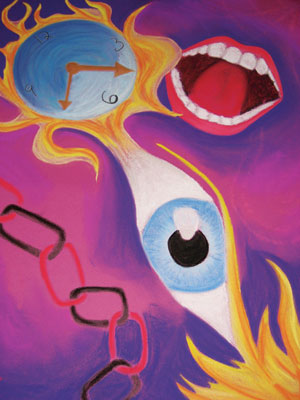 The author's comments:
I wrote this piece because I enjoy challenging myself. I have seen tons of different articles on the internet, in newspapers, and in magazines about how the aestheticization of violence is a bad thing, so I decided to write one about how it can be viewed as something good. Although it was not my original point of view on the topic, after having written this article, it is now another one of my (seemingly crazy) beliefs.
Post a comment
Submit your own