“The Princess smiled at Despereaux again, and this time, Despereaux smiled back. And then something incredible happened. The mouse fell in love.”

~p.34 The Tale of Despereaux by Kate DiCamillo


In order to obtain and return love, feelings of admiration, respect, concern, and wonderment must be exchanged. Despereaux the mouse admires the beauty of the Princess and has a romantic view of princesses he obtained from reading books about dragons and knights filled with courage. He has respect for her title and concern for her well-being. He is awestruck by her – and so he falls in love.


Admiration – feeling of respect and desire for another person’s qualities, such as their beauty, knowledge, or their personality, is sometimes the first step to falling in love. The things that we first notice about a person, their looks, the way they carry themselves, usually build a base for admiration in the future. When Despereaux first meets the princess he “stared up at her in wonder. The Pea, he decided, looked just like the picture of the fair maiden in the book in the library.”


But admiration only goes so far. Many of us admire people we are not in love with – even admire people we cannot stand to be around. For instance, I admire my friend’s devotion to movies, and I can admire someone’s beauty without even being their friend. It takes more than admiration.


In the book Stargirl by Jerry Spinelli, a strange and unusual girl turns up at a boy named Leo’s high school. Leo and his friend Kevin run a television show called the Hot Seat, where students are selected and then asked personal or embarrassing questions on television. When Stargirl first arrives at the school, Kevin and Leo both want to put her on the Hot Seat, but as Leo continues to watch her, he gets more and more reluctant.

“Every day he asked me: ‘Did you sign her up?’ Every day I answered no. He got frustrated. ‘What do you mean, no? Don’t you want to sign her up? I told him I wasn’t sure. His eyes bugged out. ‘Not sure? How can you not be sure? We high fived in the lunchroom weeks ago. We were thinking Stargirl mini-series, even. This is a Hot Seat from heaven.’ I shrugged, ‘that was then. Now I’m not sure.’
He looked at me like I had three ears. ‘What’s there to be not sure about?’
I shrugged.”

Leo has found respect for Stargirl in watching what she does – he doesn’t know it yet, but he definitely doesn’t feel comfortable in doing something he knows might end badly for her. Respect is essential in any relationship, even a bad one. Many people respect their enemies – because of their strength or their cleverness or even the way they push your buttons. Disrespect does not lead to any kind of healthy relationship, and can lead to abuse.

When I think about the people I love, the first thing that comes to mind is how well they are doing. The people we love are important to us, and so we have concern for their well-being - we ask, “How’ve you been?” and “How was your day?” because we really care, and because we hope that they have been happy and content with their life lately.


“And Edward was surprised to discover that he was listening. Before, when Abilene talked to him, everything had seemed so boring, so pointless. But now, the stories Nellie told struck him as the most important thing in the world and he listened as if his life depended on what she said. It made him wonder if some of the muck from the ocean floor had gotten inside his china head and damaged him somehow.” ~The Miraculous Journey of Edward Tulane by Kate DiCamillo

Edward is starting to love Nellie, and with love, he starts to care. He starts to care about her children, what makes her cry, and what she seems to always dream about. He has concern for her – he cares about what happens to her.

Caring about someone, and having concern for their well-being usually only occurs after you have respect for them. Once you respect them, you can then bridge the gap between caring and not caring, concern or no concern.

“She was gone. She was serenity. Her lips faintly smiling. Her golden skin. The glowing thread-ends of her hair. She seemed to have been dipped in sunlight and set here to dry. I felt a pang of jealousy, that she could be sitting next to me and not know it. That she could be somewhere most wonderful and I could not be there, too.” ~Stargirl by Jerry Spinelli

Whenever Leo describes Stargirl, he does so with wonder, and in one point he asks her, “’Are you running for saint?’” after spending a day with her – a day which she fills with doing things for other people. Being amazed, or being filled with wonder at a person is usually the first thing that happens when someone falls in love, but if they fall in love with the right person, they continue to be amazed.

Being amazed and admiring someone are two very different things, though people tend to think about them the same way. You can admire someone for something they did or for their clothes, but to be amazed by a person, or to be in wonder of a person, you must be able to admire them for everything they do. When Leo first describes Stargirl, he says, “we did not know what to make of her. In out minds we tried to pin her to a corkboard like a butterfly, but the pin merely went through her and away she flew.”

Being amazed of a person also means having respect for them, but being fascinated by them in the process. Despereaux was fascinated with Princess Pea because of the books he had read about gallant knights saving princesses from dragons. Pea brought together his hope of being a knight, and his love of a good story, and the idea of honor and pride. She also reminded him of the maiden in his favorite story. He had respect for her, he cared about her, and he admired everything she did – and so he was in wonder of her.

Stargirl fascinates Leo because he admires her for everything she does, and yet is amazed by the fact that she is so unusual. He knows that how she behaves isn’t an act, and he falls in love with her because she helps him connect with parts of himself he had lost touch with, and to think about others more than himself.

Love is made up of those four parts – admiration, respect, care or concern, and wonderment, though it can take its own paths and require other attributes, different to each relationship. The base of love rests upon those four qualities. 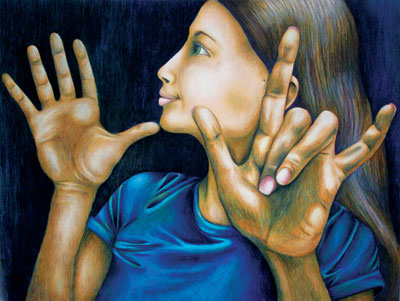 The author's comments:
I hope this makes you think about what it means to love someone, to really care about them.
Post a comment
Submit your own