I recently stumbled across an article on one of my favorite news sites about an author named Hilary Mantel. In her interview, she steps up for her fellow women in a way that some seem to find objectionable by claiming that societal expectations of reproduction and family-building are run on a “male timetable” and that women should not be looked down upon for bearing children even in their teenage years. She tells the reporter “I was perfectly capable of setting up and running a home when I was 14” and encourages teens to consider motherhood as a viable option. The comments section below the article was full of angry dissenters who were explaining why her ideas were “setting back womens’ rights twenty years” and were generally making fools of themselves.

But why shouldn’t it be okay for women to have children in their teenage years? I refer to them as women for a reason - biology requires it. Women mature physically and emotionally much more quickly than men – any elementary school teacher will agree. Women are designed to be able to handle the burden of motherhood at a young age in order to promote their species. Fortunately, we are no longer subject to evolutionary pressures in the way that our ancestors were; but, though our environments do not necessitate that women give birth as early as possible, there is certainly no reason why doing so is negative in any way.

Frankly, society needs more children who have been raised by proactive mothers who do not hesitate to jump into motherhood. In fact, young mothers were instrumental in creating most standing world powers. In the past, when the frequency of teenage motherhood was much higher than today, many great men were born of teenage mothers. Socrates’ mother would probably have been a modern high-schooler; many European kings and queens were born from teenage mothers.

Not to mention the immense progress in education since those times. A modern teenage girl has access to learning – and indeed, considerably higher standards of mental prowess required of her – than any grown woman from a century ago. If they were fit to raise children at fourteen, then why aren’t modern women? If the mothers of the founders of America were mature enough to give birth to future presidents and congressmen in their teens, then why can’t modern women do the same?

The main criticism which crops up in discussions on teen motherhood is something like “but the family won’t be stable!” In all honesty, this point is legitimate. Families with young parents are often unstable, and it’s no secret that unstable families often produce unstable children. However – families with grown parents often produce unstable children as well. Stability is a personal matter, and if a woman decides to bring a child into the world, she should be prepared to make mature choices regarding that child’s family. But these decisions are not by any means out of the emotional reach of a teenager. In fact, young girls are often less jaded and cynical than older women and will therefore be more willing to make personal sacrifices for their fledgling family.

Society needs women who can make sacrifices, and any situation that will encourage a selfless mentality is a good one. I stand by Mantel in her assertion. I see no reason to dissuade my own daughter from having children in her teenage years - while I will certainly encourage her to consider the decision seriously, her children are more than welcome to live in my home alongside her. 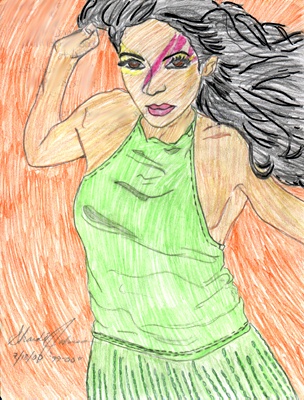 View profile
You are very right that there is no reason why a teenage woman should not be a mother. Christians believe that Jesus was actually raised by a teenage mother. However, it is very important to emphasis that a child needs a mother and a father active in their life, or else the child is really being cheated. They have a much higher percentage to get into crime, be poor as adults, and unable to support themselves. So at the same time, kids need the whole family, and many teen mothers cannot offer that.
Pushed180 BRONZE said...
on Jan. 12 2012 at 6:34 pm
Pushed180 BRONZE, Traverse City, Michigan
2 articles 0 photos 2 comments

Favorite Quote:
"Anyone who has never made a mistake, has never tried anything new." -Albert Einstein

View profile
Wow, I've never thought about it that way before. And here we are as humans thinking it's a sin and that it is morally wrong, but in all reality, it's life.