Teenagers Having Sex : Right or WRONG!

Don’t you feel that the world today is revolved around sex, drugs, and pressure? Our generation is different than our parents. Relationships are different than they used to be. There not caused by love at first sight at the homecoming game, there caused by getting drunk at a party and ending up making out or worse. Relationships these days are determined by how much they do. If teens are having sex they must be in love. People don’t realize that you don’t have to have sex to be in love. You should love the person to have sex but you don’t need to have sex unless you are married to that person and are dedicated to spend the rest of your life with that one person.
There is a lot of pressure to have sex especially in girls. All girls want to be liked and sometimes they will do things they shouldn’t to get that feeling. Girls can sometimes be fooled easily. They will believe a guy when he says he loves them, when he really just wants to do it. Those are guys; most guys just want to have sex. If you are lucky you find a guy that respects you and likes you because of you and not because of your body. A lot of teenagers these days are having sex and most don’t regret it they think there in love and they say they will get married some day. The truth is we are too young to be in the love that you need to be to have sex. I believe in young love but it’s not strong enough to lead to marriage and commitment. We are teenagers, were young and stupid. But what teenagers don’t realize is that having sex especially as a teenager is a stupid act that has series consequences. Pregnancy is a serious consequence that can change a persons life forever. Your life has to start over because you brought another life to the world. Most teenage girls say its wont happen. Not if you used a condom and or you were using birth control. That is not true there is nothing that protects you 100% from getting pregnant.
I’ve been talking about teens that made the choice to have sex but most teens don’t make the choice. Some are taken advantage of and raped because of drugs and alcohol. STD’s and pregnancies is a big problem in this world. Sex leads to guilt and regret in some and foolishness and ignorance in others. All of the bad things are all linked together somehow. Drugs and alcohol can lead to sex and the other way around. Sex and pressure are also connected.
Being in high school allows you to experience many things, positives and negatives. It allows you to make new friends, learn, and start taking on responsibility. There are many negative pressures that will come upon you like sex but it’s your responsibility to make the right choice and say NO. 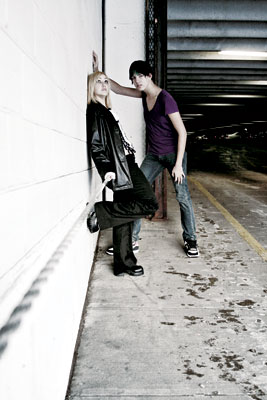 Favorite Quote:
"Learn to say no. Because when the Devil shows up with a trunk full of promises, it's harder than you think to walk away." -I don't know...
or
"Think outside of your situation." -Hodgy Beats

View profile
I agree with most of what you wrote. Personally, I don't believe it is right or wrong--I just think it's not a very smart choice. But like any other decision we make under pressure, we learn from our experiences. Some just a little too late sometimes. And it's not just guys that do this towards girls because there are a good number of girls who are pretty devious. But anyways, you have made some pretty good points.
loremipsum said...
on Mar. 18 2011 at 1:00 pm
loremipsum, Lorem, Idaho
0 articles 0 photos 30 comments
View profile
This was great! I agree with everything you're saying. I'm waiting until marriage-I think that's theway it's supposed to be.  (I also hope my future husband does the same for me.) :]
ForgottenSomeHow PLATINUM said...
on Mar. 18 2011 at 12:00 pm
ForgottenSomeHow PLATINUM, Harrison, Arkansas
39 articles 0 photos 17 comments

Favorite Quote:
Many Things Are Said,
Many Words Are Meant,
It's The One's That Hurt You The Most,
You Don't Never Forget.

View profile
I Think You Need To Stop Listening To Your Parents. I Get That It Is Bad To Have Sex Just For You Thinking That Someone Loves You. But, It's Hard Not Too. Girls Want The Satifaction Of Someone Being There And Loving Them For Them. Or To Fill A Vold. I Get That Love Is Not What Is Shown But What Is Earned. And, If You Want To Earn Things You Have To Work For. I'm A Girl Who Hasn't Had Sex But I Have Seen Where People Love Other Because Of What They Provide Them. I'm A Girl Who Was Accidently Born Into This World Because Of What My Dad Did To My Mom. And, My Mom Regrets Ever Doing It. But, She Doesn't Regret Having Me. You Just Have To Learn To Live With What You Don't Have, And Show What You Got.
Deanna Tocco GOLD said...
on Feb. 9 2011 at 10:36 am
Deanna Tocco GOLD, Congers, New York
16 articles 1 photo 31 comments
View profile
Thanks :)
Nelson SILVER said...
on Feb. 8 2011 at 1:13 pm
Nelson SILVER, Amarillo, Texas
8 articles 0 photos 4 comments

Favorite Quote:
"When you're dreaming with a broken heart, the waking up is the hardest part..." -John Mayer-
"Never Neverland I'm used to Peter Pan because nobody wants to grow old..." -Lyfe Jennings-
"Never let the world see what you're really feeling." -Mom-

View profile
I enjoyed reading your article. Very well written. :)
Deanna Tocco GOLD said...
on Dec. 13 2010 at 10:50 am
Deanna Tocco GOLD, Congers, New York
16 articles 1 photo 31 comments
View profile
if you liked my article why are you dissing ppl that like it to?
eyorebby said...
on Dec. 7 2010 at 10:17 am
i loved the article but sometimes girls get lonely and theres nothing to do! but other than that i loved the article good job and good point about boys they tell you they love you and the way they want you to show your love to them is to loose it to them or they will break up with you! good job!
AaronLawrence SILVER said...
on Nov. 29 2010 at 1:54 pm
AaronLawrence SILVER, St. Louis, Missouri
9 articles 5 photos 106 comments

View profile
They want us to think we have sex cause of peer pressure-my friends who are in sexual relationships one-love it, two-not idiots or bums, three-just as mature as my other friends.
AaronLawrence SILVER said...
on Nov. 28 2010 at 5:59 pm
AaronLawrence SILVER, St. Louis, Missouri
9 articles 5 photos 106 comments