Love is Everything | Teen Ink

Favorite Quote:
"Everyone says love hurts, but that is not true. Loneliness hurts. Rejection hurts. Losing someone hurts. Envy hurts. Everyone gets these things confused with love. in reality, love is the only thing in this world that covers up all pain and makes someone feel wonderful again."

What is love? To most, they would say it's having a deep connection that intertwines with someone or something. To others, it may be a painful reminder that left scars and many trails of tears. Love really is everything. The opposite of love is not hate. It's indifference. Love for me is something I revolve around and crave. At a very vulnerable age, like this one, is crucial to have an understanding of. You can have a love for something like dancing, which is a passion type of love. The kind of love I want to talk about is the romantic relationships.

I experienced, or at least I believe I experienced that kind of love. Not the kind that you find in movies, but the kind that you see in Youtube videos and images of online. Love isn't all hugs and kisses. Not all stories are supposed to turn out as a love at first sight, highschool sweethearts, or friends become lovers. You have a crazy thing on your side called fate that works in mysterious ways. The funny thing is everyone has it, but everyone also gets a different outcome. The kind of love I had was with one of my best friends.

I won't spill all of my heart out in black ink to you guys, but simply put, a year ago, I had feelings for one of my newly made bestfriends who I trusted and laughed with deeply. Overtime, I cared and worried about this person more and more until it came to my attention that I had grown feelings for him. We got together about a month later after we confessed with each other, and we kept our relatioship very stable and mature... or so I thought. About 2 months into dating we were deeply intimate, not physically but emotionally. We bought each other presents for Christmas, went to birthday parties together because we had the same group of friends, and we even got to the point of comfortably holding hands and looking into each others eyes. If you asked any of our friends, they would say our relationship was one of the cutest, funniest, and idealistic role model relationships they'd ever seen. I agreed until we were almost to our third month. We were on a rocky tightrope, getting into stupid arguments, staying mad for days at a time, complaining about not spending time with one another. It was all too much.

When we had to go on a trip together, I didn't realize this would be the last time we would say we were together. He was acting like a completely different person. Though this was the same guy I fell in love with, it's like he turned into a complete stranger overnight. He treated me as if I was dumb, teased me, made fun of me, and wouldn't listen to a word I said. Even though this trip was a passion of mine, which was band, all my energy seemed to go toward how to move forward in this relationship. It drained me and left me me in agony to this day. I decided to discuss with my roommates on the trip and came to a conclusion that it was time for this to end. I had been manipulated, he had always blamed me for everything, if he told me something was wrong, I would always say I'll change or I'm sorry, I'll do better.

I broke up with him that night and we had a long conversation about it. In my opinion, he wasn't mature enough yet. He was two years younger than me and we had just met each other this year formally. Anyways, I was talked about by him after that for about 4 or 5 months, and that ruined the rest of my school year. He would tell people never to date me again, that I was the one that was awful in the relationship. Anyone that liked me, he'd tell them lies and that he would riot on me if I ever broke up with them the same way I did him. Though he said all this stuff about me, I stayed silent. Maybe it was my depression or just my heart, but I closed up after that. I didn't talk to my friends as much, hardly focused on what mattered, and I always kept thinking he's doing this cause I wasn't good enough for him. I was just a waste of his time and we shouldn't have dated in the first place. Everything went downhill after him. I was so wrong.

I've been in pain over this to this day for about 9 months now which is way over due. I'm afraid to try to love someone again because of him. Because of my story, I want to give you gals some advice. I've had depression for around 3 years now, but that's not the point. The point is ladies, love yourself first. Look at the big picture before you rush in trying to give it your all. I don't regret dating him. It gave me an experience of what love kinda feels like at first. Because of him, I'm able to find out my type of guy and what it is that I find attractive. Fate made us split apart and at first I couldn't see it, but now I do. I've moved to a new school and made new friends who are similar, yet different. Now here I am a year later, falling for someone I've recently met, but because of my experience, I know that I have walls I need to break down and figure out who it is I'm supposed to be in this world first. Break down those walls as quick as you're building them up, otherwise you'll miss out on something great. You'll miss out on someone who wants to love you for you. You'll miss out on enjoying your youth and wasting it on someone who already has a different path from you. Look forward with your head high, even if you don't know what guy you're going to run into next, just know that he has a meaning in your life. Eventually, fate will steer you right into the arms of someone amazing who you weren't expecting.

Don't be afraid to make mistakes. Don't be afraid to get hurt. You are good enough, You are loved. Someone out there does care about you while sitting in their bed tossing and turning about the memories you guys have made. Love yourself and all the faults that come with you. Get involved with other people outside of your comfort zone and let them in instead of shutting them out. Take a wrong turn, get into some trouble. Heck, date someone you would never dream of dating. Don't get hung up on the last guy for a year and drown yourself in insecurities, sorrow, and depression. I'm speaking this from a first hand account, so I would know. You'll never know whose trying to climb your walls until you ask who it is. Then you invite them in and spend so many memories with them. Without even realizing it, they've broken down your walls without you even remembering you had them up That's what my love is. What is love to you? 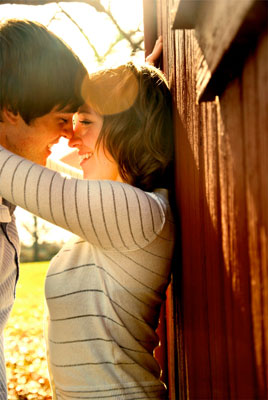 It's my irst piece and I'm scared but I want to keep writing these regardless. Thank you to those who support me and my work and to those who relate. I love this website. It's nice to see mature teens writing about real issues in the world with an open mind.