There is an epidemic sweeping through the world that most people don't know or care about. That is because they believe that it doesn't affect them. They couldn't be more wrong.

Amphibian chytrid fungus (Batrachochytrium dendrobatidis) was first found in Africa and Australia but is now found in Europe and Central and South America. For humans, it is not particularly deadly, but amphibians, most of whom breath and absorb water and nutrients through their skins, it is deadly. The fungus chemically changes their skin so that it is less permeable and prevents the frog, salamander, or caecilian form absorbing the electrolytes that they need. The imbalance of electrolytes then causes the amphibians heart to stop. What arguably even more horrible is that with species like salamanders and caecilians, who breathe through their skin, the fungus can cause them to slowly suffocate. Since the 1970s, around 200 species of amphibians have gone extinct, many of them probably due to chytrid fungus. I say probably since as a general rule frogs can be rather hard to find since they can live in areas that humans have trouble reaching. Amphibians can just almost disappear as fast as we find them. Since we know that chytrid fungus has caused many extinctions in the past, it is not unreasonable to assume that many extinctions are caused by chytrid fungus, especially species that are from areas where chytrid fungus has been observed.

The reason that chytrid fungus has spread so quickly is the amphibian pet trade, especially species that are illegally caught in the wild. Because the chytrid fungus only takes effect once there is a certain number of them found on the amphibian, people will capture frogs and salamanders and sell them to foreign countries, where the fungus then starts to spread. Another cause is people releasing captive frogs into the wild. People will buy frogs, realize that they don't want to keep them, and then release them into their backyards. People will do this regardless of where the amphibian is from. This causes the fungus to spread even more. Luckily, the fungus is yet to spread to the US, since many biologists and herpetologists saw what was happening to the rest of the world and petitioned to the government to crack down on the import and export of amphibians to the US.

If you are still reading this article, then you might be wondering how this affects you. It affects everyone since amphibians are what is called bioindicators. Because they are super sensitive to environmental changes, they act as nature's early warning system if there is something wrong with the environment. While the chytrid fungus is harmless to humans, there are other things that the amphibians will react to before we notice that its there. So at the end of the day, amphibians are more important than most people think. 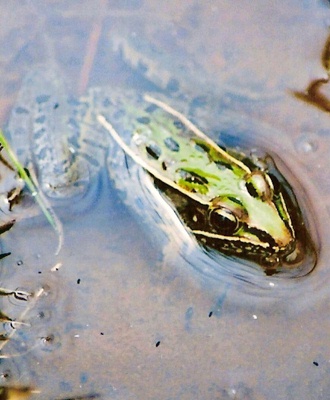 Favorite Quote:
"Be who you are and say what you feel because those who mind don't matter and those who matter don't mind." -Dr. Suess