Most have heard the trials where parents and their kids sue fast food corporations like Burger King and McDonalds after becoming obese. Of course in a trial, one side is the side of guilt, while the other is innocent. Is there such thing as an innocent side though in this debate? Can a person really say only the consumer is guilty, or only the corporation is guilty? Technically, a person can say these things, but they are wrong and most definitely coming from a biased, opinionated point of view. Neither the corporation or consumer is 100% guilty, but in no way are either sides guilt-free.

The majority of America and the rest of the people in the world have tried fast food, and most have deeply enjoyed its flavor and convenience. Because of this, people are quick to say it is only the buyer’s fault when he or she becomes obese after frequently eating at a fast food restaurant. After all, they are the ones buying and eating the greasy product. This, in my view, is only half true. The customers have a say when they buy the food, and are choosing to put it in their bodies. It is not like the fast food chains are force-feeding the burgers and fries down the customers’ throats. They are partly to blame for making themselves fat. Also, adults start getting their children addicted to this food early in life by taking them there every single day, which is not helping their weight what so ever.

Even though the restaurant chains are not keeping people hostage and threatening them if they do not eat the food, they still have every intention for people to frequently come to the fast food joint, despite knowing how bad the food is and how harmful it could be, as most people should know by now that obesity if the second top killer in America, just behind smoking. Surprisingly, this beats out people who die from cocaine or car accidents or fires or crystal meth. It is a known fact that people get addicted to fast food, and can’t help but eat it, even when they don’t want to, making it equivalent to that of a drug, and yet fast food restaurants still spend millions of dollars on flashy commercials in order to get you to eat it just to make a good profit. What’s worse, many commercials are aimed directly at children by offering toys with their meals. Some people, especially in the inner city, do not have as many options for breakfast, lunch, and dinner as other people, and fast food restaurants are strategically placed to be the only food convenience around. Our country has also become so dependent on these corporations, as it is what is keeping our economy from falling on its last limbs. In a way, that is just pathetic.

No matter how much a person says, what they do, what they think, nobody will ever be technically innocent in these battles. 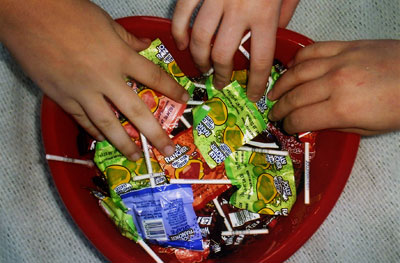 The author's comments:
I read a piece of writing completely blaming the consumer for their unfortunate obesity, and later another blaming the excessive amount of fast food chains we have in America. I then thought, why are either sides guilty or innocent?
Post a comment
Submit your own

View profile
Brilliant! Yes, I agree. In no way is it fair that these corporations make it nearly impossible for some to say no, but consumers still have a choice! Good job representing both sides of the argument.