How to be a Nonconformist: 13 Essential Rules | Teen Ink

How to be a Nonconformist: 13 Essential Rules

13. You must NEVER wear designer labels. Throw out anything with an insignia on it, unless it’s political. It’s preferable that you don’t care about clothes at all because, of course, that would be an admission of superficiality.
12. Speak with impeccable grammar ALWAYS, because anything less would be a betrayal of normality. Also, feel that is not only your right, but your duty to interrupt others when they make a grammatical error and to correct them. This will not win you many favors, but it shouldn’t matter to you since you should not care what others think.
11. Absolutely no celebrity crushes are allowed, especially if they are Hollywood movie stars. Lesser-known, sophisticated artists are excusable, but you must NEVER idolize with the masses.
10. Act as aggressively green as you can. Compost, ride a bike, and only buy organic, free trade food. Rub your environmental virtues in your friends’ faces. Everything you say must be politically correct, so that you are not offending any minority group, just the majority of everyone else.
9. Your taste in music must be refined carefully, so that it is unique, but not abominable. Mainstream pop, hip-hop, and rock are out of the question. Alternative and classical are preferred, but you must be careful not to pigeonhole yourself into any specific category. And please, make sure that the music you listen to is in fact music, and not just noise.
8. Oppose the current government of the country in which you live as vocally as possible. Protest every decision made, and demonstrate often enough to tally up a few arrests and fines. Do not join either major political party; rather, pick an obscure party with extremely polar views on one end of the political spectrum, preferably the left wing.
7. Utterly shun TV. There is no give and take on this rule. TV is taboo, and even one glance at the screen disqualifies you from essential bragging rights that will undisputedly elevate you above your peers Movies are an entirely different story, as they are an art to be respected and critiqued, but only if they are independent and shown at a film festival.
6. Avoid shopping at malls. Shopping only reveals shallowness, and it if is necessary it must be carried out at obscure, unique boutiques, or authentic, vintage thrift stores, NEVER at commercialized, corporate department stores which represent all that is evil in the world.
5. Do not participate in organized religion, particularly you parents’ faith. Refute anything considered holy or sacred by pointing out its flaws and hypocrisies.
4. Be aware of popular culture to the most modest degree, only enough to scoff at it. Have opinions about everything, and make sure they are controversial, so you have an abundance of opportunities to make a statement.
3. ALWAYS question the crowd, and make a point of crumbling their shallow beliefs to dust again and again. NEVER agree with the majority, no matter how valid their idea.
2. Boast insufferably about how different you are, so that everyone is aware of who you are, a person who will not conform, no matter what kind of coercion is thrown at you: torture, brainwash, even well-reasoned logic. You will stick to your principles, which are more important to you than your friends, your family, or your life. Above all, make sure that everyone knows you are better than they are because of your nonconformity.
1. NEVER follow the rules. That would be conforming. 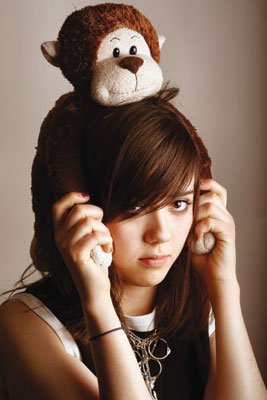 The author's comments:
If you haven't guessed, this is a satirical piece, and I wrote it intending to poke some fun at people who proclaim themselves "nonconformists," myself included. I just wanted to show how sometimes we can get a little carried away in our search for individuality.
Post a comment
Submit your own

coachjr said...
on Jan. 30 2012 at 10:20 pm
think about what this article says. the number one rule is NEVER follow the rules. that would be conforming. yet theres 13 other RULES to follow on being a nonconformist. so according to this article, if youre following these rules, youre a conformist.
Kerrberr said...
on Aug. 30 2008 at 3:55 am
Nice article, Molly. I can definitely see certain people there...
GoAskAlice said...
on Aug. 29 2008 at 5:48 am
Haha... I love this! I go to a VERY nonconformist school, and I agree: A lot of the people who are nonconformist get so carried away that it's OBNOXIOUS. Good luck, fellow nonconformist!
whiteoutmonkey said...
on Aug. 29 2008 at 4:46 am
What? Nothing about Starbucks? I would at least hope to find some reference to street food, indie music and films, and studying abroad. very good. You might try making some of the descriptions a bit more radical, extreme, and satirical; some are lacking a little oomph.

Oh. And I'm horribly offended that you didn't mention shoes made from recycled tires and hand-woven hemp. I'll go drown my sorrows in a large earthen mug of some exotic Eastern tea.
HVJ said...
on Aug. 29 2008 at 4:24 am
This is genius. Therefore, you must never write anything like it ever again. That would be allowing what others think to condition what you do. In the same vein, never wear denim.