For some people, being expressive only happens in tiny little moments. But for others, being expressive is their life. Steampunk is one of the perfect images of people who longed to express their artistic creativity, but were called strange in the process. But now with the Steampunk movement, people are free to show off their gifted skills to create. Steampunk has affected fashion, music, art, literature, and more. It is one of the most artistic movements today, and attracts many from around the world.
In the late nineteenth century, Britain created what we now call “The Victorian age.” The age of progress, fashion, and beautiful social manners between friends and acquaintances. The age that some people look back at now, and wish it was still here, including me. Thankfully, in the mid 1980’s, a genre of science fiction called “Steampunk” burst into the open air, letting the modern day people live their dream of an old fashion future, Steampunk. Though Steampunk is without a doubt, not as prim and proper as the Victorian age because it is a punk, meets time travel, meets art movement. Yet it is a beautiful mystical world of sane, yet, extremely imaginary people with a knack for style.
The Steampunk fashion is in one word: Incredible. They mix Victorian elegance with futuristic time traveling gadgets to make what would seem, an outfit that would clash and crash, but actually pull off immensely well, into an extravagant outgoing outfit of elegance and detailed beauty. Victorian boots are always an essential in a Steampunk outfit, and are normally worn with the outfit as unaltered originals, yet some Steampunks wear modernized versions of the boot for every outfit. Other essential Steampunk items (yet not worn with every outfit) are glasses, parasols, and at least one jewelry item that has remnants of an old watch on it (Remnants like: Gears, watch face, etc.) The Steampunk style is extraordinarily unique, and can be easily spotted in the largest of crowds with a mere glance. The culture, just like the style, is outgoing, and very distinguishing.
The Steampunk culture is a world in itself; it is split between two different outlooks of what Steampunk truly is. The first believe Steampunk to be an artistic fashionable version of Goth and Emo, though not depressing, merely another dark culture. The second believe Steampunk to be a wonderful fashion and literature movement that is a perfect way to express artistic abilities to the max, instead of merely wearing what’s trendy for the year, month, or week. The Steampunk culture has attracted bands, fashion shows, movies, and more. It is considered an attractive and powerful movement in every shape and form for many who hear of it and join.
Steampunk is a beautiful imaginary ride of life that people who join the movement cannot get enough of. It’s a movement that expresses art, not doom and gloom. It’s style, history, and culture show art in a new wonderful way. I believe that Steampunk will last for a very long time. Because Steampunk is exactly what it loves. Timeless. 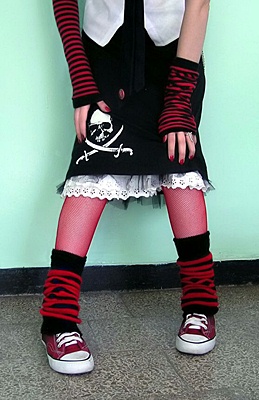 The author's comments:
I love fashion, and people who are fearless to show art and expression through clothing. Steampunk inspires me because they are pure freedom of art.
Post a comment
Submit your own

View profile
Thanks so much! And thanks for leaving a comment:)
FREYASHAWK said...
on May. 1 2011 at 9:18 pm
FREYASHAWK, Henderson, Nevada
0 articles 0 photos 2 comments

Favorite Quote:
" Life is like a movie if the movie sucks this far you probebly know its not going to get any better you shouldn't be blamed for walking out early"

View profile
I love this !