Through the Streets of India | Teen Ink

Through the Streets of India

I sigh loudly as the car, after several painful hours of relentless dragging along the pitiful road, comes to a halt. In India, one can’t do without a car but having a car has its own pinpricks. For instance, being stuck in the middle of a hundreds of kilometers of traffic on a hot, balmy day with no sign of potential clearance.
I crane my neck to see the cause of this obstruction. It generally isn’t like this. I squint my eyes, trying to take in the scene when a loud cry of an elephant makes me jump.
Yes, an elephant, in the middle of the road, on a weekday in New Delhi. Go figure!
A smile manages to cascade down my lips as I try to see what really is going on. A procession is making its way down a narrow alleyway but turns out, the hero of their show, the heavily gold clad eye-catcher elephant is stuck between the two buildings. It wouldn’t have been too much trouble getting the elephant out of the mess really, had it not been for the mass of eager and inquisitive passer byes piling around the now shocked beast.
The drivers had left their engines running in the middle of the road; the rickshaw pullers had abandoned their tricycles laden with confused and nonchalant men with sweat drenched shirts, rugged chappals and an empty lunch box to accompany and equally empty stomach; curious vegetable vendors had left their carts in the middle of nowhere to hoot and cheer and of course, all the sari clad homemakers of the locality had forgotten their screaming toddlers who were weeping and flailing their arms around, vying for attention, just to lean out of their balconies to get a better view.
And who could forget the young, college kids who usually wear more colors than a rainbow, with their weird, out of nowhere hairdos that they term as ‘in’, oversized t-shirts, ripped jeans and a pair of barely-there shorts with dirty Jansport bags hanging loosely over their shoulders. Give or take a roadside Romeo whose gaze was transfixed on the long, bare legs of a college girl and this was your ideal drama that you generally watch on T.V. A perfect blend of screaming people, stuck animals, crying babies and a long line of honking cars.
The driver put his foot down on the accelerator and the car lurched forward, only to come to a stop and few meters away.

The procession had returned back to pull their elephant out of the way but it wouldn’t budge. And why would it? It was getting its more-than-desired fifteen minutes of fame. The attention that even the circus couldn’t fetch it. The ruddy circus with its boisterous trained lion, Sher Khan who always managed to gather the attention of all the viewers standing by, by just lifting its paws or gobbling up and innocent rabbit. If only he could see him right now…

The elephant’s glee was beyond its very own control. And it, with a loud pant, hoisted itself up and slid through the tiny gap.
A roar of applause thundered through the crowd as people jumped up and down, rejoicing the breakthrough of the month. The housewives cheered, their toddlers wailed louder; the vendor fed the elephant an unripe banana (do you honestly think that he would waste the ripe one on an elephant? ); the college students started dancing (much to the Roadside Romeo’s delight) and even the angry customers of the now tearful rickshaw pullers could not contain their joy; they now had a fresh piece of gossip to report to their wives.

I smiled to myself and looked up at the blue sky emblazoned yellow and orange by the setting sun. These are called everyday merriments. And we Indians sure do know how to celebrate them!. 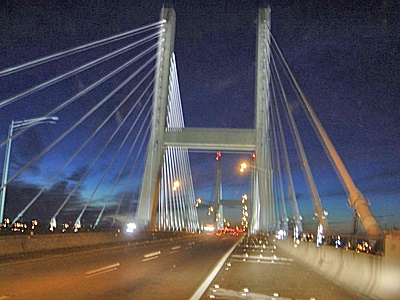 yeah they didn't really have a picture of a street crammed with animals :P so i had to pick up the bridge becase it still has a road in it..

and im glad that you could relate to it :)

Did you pick the picture of the bridge? because that bridge looks like it's from my hometown, Boston.

That reminded me when I was in Algeria and there would be donkeys. turkeys and cows lying in the road.