The Ghosts of Gondar | Teen Ink

The Ghosts of Gondar MAG

In the highlands of Ethiopia, sits a city that has been the center of history. She has seen the rise and fall of kings, the birth and destruction of empires, the virtues and pitfalls of men. Gondar was none of these things to me the summer I turned 16 – instead, she was a fantasy.

From the moment my father announced that we would be taking a summer trip to Ethiopia, my brother thought of the skyscraper-studded city of Addis Ababa, while my sister looked forward to riding a motorboat across Lake Tana. I, however, dreamed of Gondar.

I’d seen the city nicknamed the Camelot of Africa before, and I still remembered the smell of my grandmother’s house and the crows of her roosters. But our last trip to Ethiopia had been for the sake of family, with people to greet and cheeks to kiss. This time, we were going for what my father called “educational purposes,” which I understood as his excuse to show us as many landmarks as possible.

Gondar was the apple of my eye in the weeks leading up to the trip: something to look forward to amid all the frenzied traffic
and strange looks guaranteed to us, with our American hair and American jeans. This was the native land of my ancestors, where they had lived and died and worshiped; a portal to an age that no longer existed, the glory of which was now remembered only in old books and ardent lyrics.

It took seven days of trudging my feet and sighing loudly to get us to Gondar, but as I rolled up the famous hills sandwiched between my brother and my father in one of Ethiopia’s notorious bajaj, shaking hands clutching the thin fabric of my tibeb dress, I knew that this was it.

As my father headed into the ticketing office to find us a tour guide, I surveyed the grounds, with buildings that seemed to glow and balconies that seemed to beckon. With our English-speaking guide in tow, I itched for all the stories I would tell my friends back home.

The tour began with Fasil Gemb, the main structure of the compound and onetime living quarters of the imperial family. We
were shown the central castle with its reception hall, banquet hall, and royal chambers. We saw the guard towers, cramped little rooms with windows just thin enough to shoot a trespasser on sight. Every room seemed to come alive as we passed through it, whispering centuries of secrets it had witnessed.

Authentic relics remained, like the glasses that noblemen used to drink tej, Ethiopia’s famous honey wine, and the original hearth that connected the two dining rooms. Animal horns that had been attached to the walls for the purpose of holding meat were now dark and calcified.

I was in awe. What must it have been like to live here? To work here? To behold this place when it had cost lineage and a title to get in, instead of a few Ethiopian birr? To revel in the glories of the old world, with no idea that it would ever pass away?

We then came to the library, and all thoughts of what a fairy tale this place must have been disappeared.

This crumpled hunk of stone, our guide explained, had long held some of the most precious manuscripts in the world, written in Ethiopia’s ancient language of Ge’ez. It had once been a center of majesty, but its current state of dilapidation was the work of thieves – not the kind of petty criminals that could have been thwarted by the guard tower, but the kind that came as friends. First Great Britain, breaking peace between the nations when it decided that hoarding sacred artifacts for its museums mattered more than integrity. Later Italy, when it decided that if it could not make Ethiopia a colony, it had to take something.

The castles of Gondar were no longer a compound, but a graveyard. The emperors that had walked these halls were ghosts of the past: ghosts that could not rest because they were trapped behind museum glass rather than buried in Ethiopian soil.

Today, Ge’ez classes are offered in England and Germany for European scholars who aim to decode holy texts stolen from their motherland. Everything about this is a trespass – on a history, on a religion, on a people. And though Ethiopia is the only African state never to be colonized, it is not free from the stains of foreign imperialism. There are still the graveyards dedicated to monks murdered during the Italian occupation, the statues erected in honor of fallen generals, my own great-grandfather’s war medals that my grandmother wore until her final day.

Like many Ethiopian-Americans, I have always been first to speak of Ethiopia’s successes, her historic feats and unknown triumphs. The losses had never felt worthy of mention – why should they be, when they could only be a source of shame? But I know now that those losses are worth mentioning, if for no other reason than recognizing what we had before it was taken, and appreciating everything our forefathers did to ensure that we never suffer the same defeats again. The ghosts of Gondar may haunt Ethiopia forever, but they will never break her. 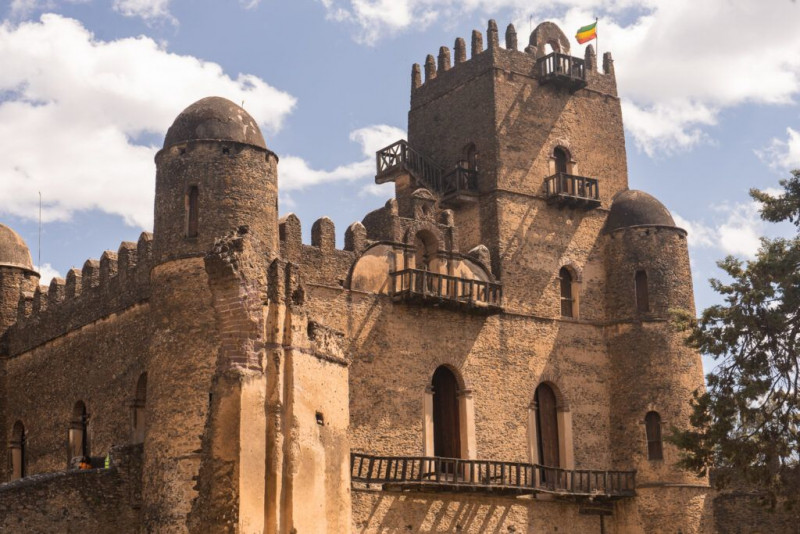 Though I was born in the United States in 2005, I grew up in a very much Ethiopian household and spoke my native Amharic before English (ironically enough, I'm now much more fluent in English than Amharic).