Where I Stand | Teen Ink

Where I Stand MAG

It has been nine months since I last stood on Siloso Beach.

This location started off as the destination of an impulsive adventure, a journey with a goal as simple as “somewhere we can see the ocean” and gradually evolved into something much more. I can still remember the afternoon when we first decided to go to Siloso Beach. The hot tropical sun blazed as we stumbled through the unfamiliar city. Google Maps was confusing as ever; it led us through small bushes and large shopping malls. We eventually sat on the tourist train, and the whole of Sentosa gradually unraveled itself in front of our eyes.

The sea was a peculiar shade of green and blue. As the train moved on, the scenarios developed like fast-changing stop motion pictures. From the bustling VivoCity mall, to skyscrapers, to the busy harbors packed with heavy ships full of cargo. After the harbors came the renowned Universal Studio where countless people swarmed around Princess Fiona’s castle and screamed on the Egyptian Mummy-themed roller coaster trying desperately to spark their already graying childhood memory. We got off at the third station according to the broadcast in which a cheerful male voice kept repeating “Welcome to Sentosa!”

The journey took us nearly two hours. When we reached the beach, the sky was already darkening. Eventually, it was hard to tell the color of the waves in the dimness. All six of us sat casually on the beach. Behind us, the neon lights of beach bars blazed gaudily on, reflecting off wine glasses and casting pretty shadows on the slippery sand. The jovial laughter of girls in bikinis were louder by the minute, encouraged by cordial jokes under the influence of the liquid in their transparent cocktail glasses. In front of us, far in the darkening sea, the lighthouse stood like a solitary being. The light was white instead of green, so I guess Gatsby wasn’t standing on the other side of the dock. As we sat there, in the fine gap between two different worlds, I felt like I fit right in. After nine months, like a migrating bird, I am visiting this Siloso Beach again.

A lot of things happened during the nine months, but few deserve to be remembered. The Corona-virus deaths around the world, and political tension between China and America dominated most of the headlines. Exams, nostalgia, and “The Great Gatsby” dominated me. A lot of things changed, but a lot remained the same. I have convinced myself to try to accept and even like this country.

For me, Sentosa is a place where I feel like I have traveled to a new country. The diversity of races and languages being used by people from all over the world always makes Singapore seem a bit distant. It is as though I haven’t already lived here for a year, but that I am just a casual passerby in this land, just like the rest of the crowd. It is only when the uncertainty rises and I am being pressed up against the window in the tourist train due to a large number of people that a fit of anxiety comes back to me.

With the opening and closing of the doors, people rush in and rush out, eager to see the view or eager to get back where they came from. Looking at the bigger picture, the same thing can also be said for Singapore. The country itself is like a harbor, attracting foreigners from all over the world. Everyone has their own reasons to board the harbor and they all come with an excited heart. For some, this will be a place to stay. But for the others, this is just a place for refreshments before they drift off to their next destination.

Feeling the swell of anticipation in my heart, the train turns a corner and I see the familiar piece of landscape. Siloso Beach during the day has lost some of the mysterious nature that it possesses during the night. But somehow, instead of being disappointed, I feel content happiness that can only be sparked by the overwhelming sense of familiarity. It is a feeling that has been lacking for such a long time that my breaths come out short and ragged when I tentatively feel the sand beneath my bare feet.

Facing the vast and seemingly endless ocean, I can feel tranquility engulfing me like a much-needed blanket on a cold winter night.

So I close my eyes and laugh. 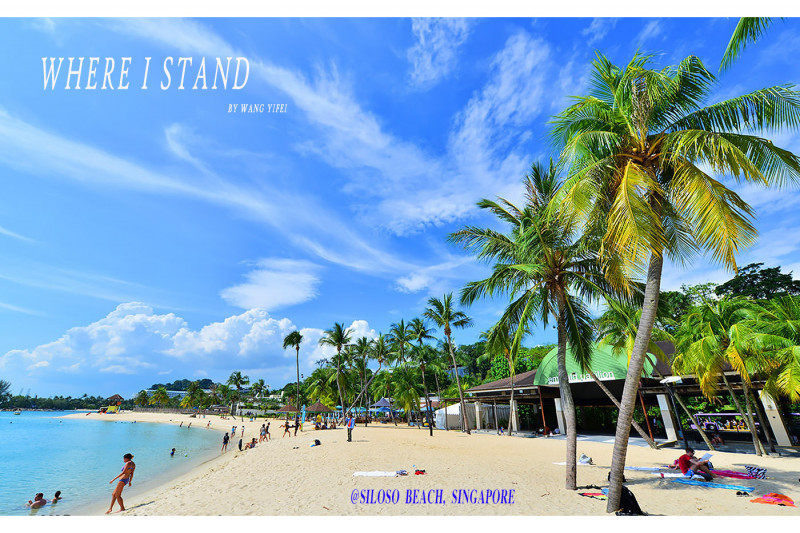