Relationship Between Dogs and Humans in Paintings | Teen Ink

Relationship Between Dogs and Humans in Paintings

Arnolfini Portrait by Jan van Eyck was created in 1434, around the time of the Renaissance, during which people regarded the possession of domesticated dogs as an indication
of their nobility and luxury. Artists emphasized an accurate depiction of visual details that suggest physiological precision. Throughout the Middle Ages, most artists, few of whose names have been recorded and remembered, were preoccupied with depicting religious motifs. However, art gradually evolved into a
method of documenting people and events of contemporary times during the Renaissance. Painting began to serve as a reflection of the individual artist’s characteristic talent and expression. Fresh new ways opened up for the audience to attain an intimate glimpse of both the details of the subject matter and the artist’s sensibility. In this particular painting, meticulous attention to detail provides a view of the growing wealth and autonomy of the middle class in Flemish society. This piece of art was painted by one of the most significant figures within the realm of Renaissance art, Jan van Eyck, a Flemish painter. His innovative technique of layering thin glazes of oil paint brought an astonishing realism to viewers of the time. In his own time, Jan van Eyck was internationally recognized
for the exquisite details in both his religious paintings and secular portraiture; he was entrusted with painting the portraits of some of Europe’s most influential people during his career.
As seen in the painting, a small black dog is standing besides its owner, who is wearing a glamorous green dress in a room full of luxurious objects. The dog is placed right in between the couple, signaling their marital union. The looks from both subjects create an atmosphere of intimacy in keeping with the serenity associated with marriage. The single burning candle possibly symbolizes the
presence of God at this sacred moment and provides evidence that a union under the Christian faith is taking place. According to a historian, the dog was not only a pet but also a symbol of fidelity, which suits the theme of marriage. It is concluded that the woman is in high status through the observations of the luxurious and lavish background, and the dog is an existence of loyalty and support to the woman. “Esteem needs” from Maslow’s Hierarchy of Needs seems to adjust to the concept established in this painting, as it is interpreted that the woman feels accomplished of owning a pet that supports her with loyalty and respect. 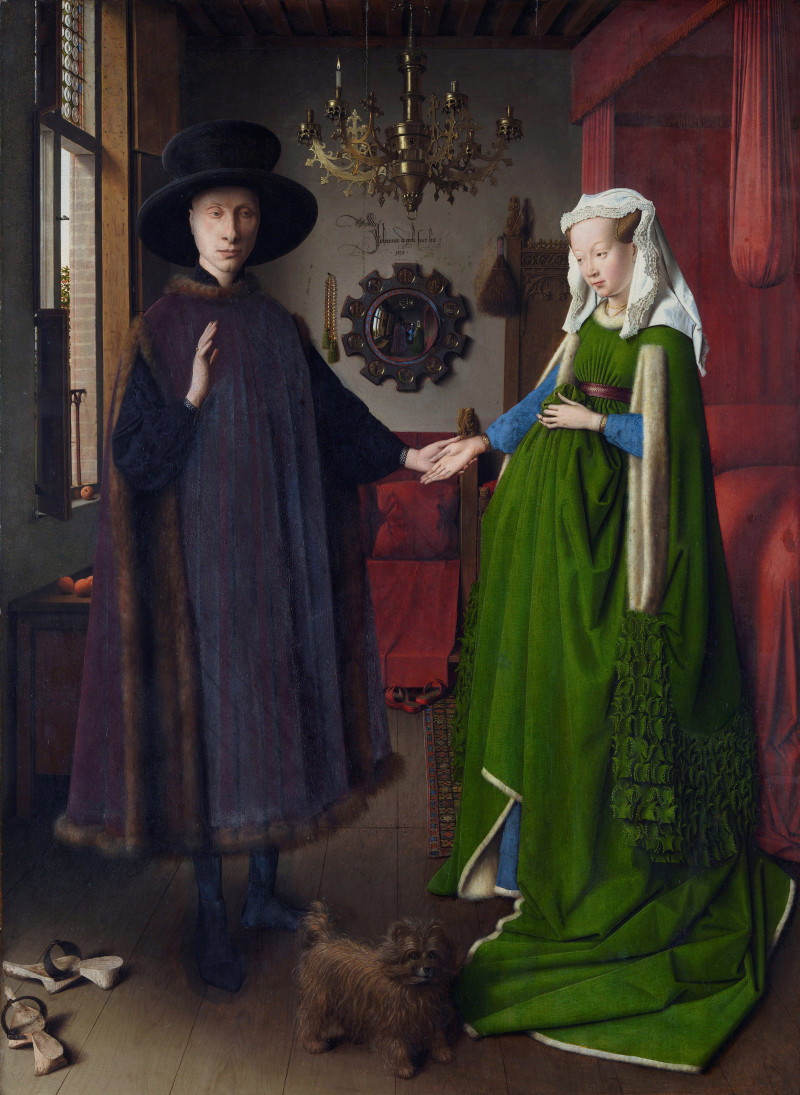