The freshly cut grass crunched under my Nike cleats. My heart was pounding out of my chest as I jogged to the center of the field. I readjusted my headband, bit my thumb nail, and give one last tightening tug on my pony tail. The referee raised his hand at each goalie to alert them that the game is starting. I felt my adrenaline rushing through my veins. He blew the whistle and the other team put the ball into play. I felt my feet instinctually spring from the ground. The game had started.

We played for a long period of time. At 37 minutes, the opposing team slots a ball through our defenders and they create a brilliant goal. My team yelled to pick our game up as our goalie retrieved the ball from the back of the net. She kicked it to the center circle and once again, the referee blew his whistle. Sweat was dripping down my face like a popsicle melting on a hot day. There were only eight minutes left in the half. We desperately needed a goal. I received the ball in the center of the field. As I take my first touch, I hear my teammates yelling “man on” to let me know a defender is coming up behind me. I face up and ping the ball to the right corner flag. I feel my dominant foot come in contact with the ball for a solid hit as I look down at the red and white Adidas ball. The right midfielder on my team anticipates my ball and sprints behind the defense. She controls the ball, cutting in towards the goal, takes a touch, and my breath stops. She hit the ball and sent is soaring into the upper left corner of the goal. I hear the ball run down the net. My team all runs up, and all you can hear are the slapping of hands. The happiness and relief on my teammates’ faces shine. With three minutes of the first half left, we have made a one nil game a tie. The ball is restarted until the referee lets out a rolling whistle signifying that the half is over. We break for a five minute half time.

After the half, both teams resumed their positions on the field. The referee blew the whistle, and my team gained control of the ball. I felt my calves cramp up. I thought that they were going to bust through the electrical tape wrapped tightly around my shin guards to keep them in place. I felt the pounding that you experience when a doctor takes your blood pressure. I can feel my heart beat in my burning calves. I am unable to produce saliva and there is white gunk surrounding my mouth. It tastes like I just woke up and haven’t brushed my teeth. I can feel the drops of sweat rolling down my back, but I have to keep running. I pick up my feet and stop next to my mark. Her number is 23. The ball goes out of bounds on the opponents end line and they are awarded a goal kick. While the team is setting up their goal kick, I pull down my compression shorts and I hear a faint voice calling my name. I turn and one of my teammates on the sideline is holding a water bottle. I run over and grab the wet water bottle, all the ice had melted. Condensation had left it sweaty and cool. I cupped my lips over the opening and the cool water hit my tongue, then my throat. Water had never tasted that good. I splashed some onto my face and quickly ran back to my place on the field, next to the opposing center midfielder number 23.

Feeling rejuvenated, I get ready for the goal kick. We continued playing for a while. There was one yellow card awarded to the other team. She slid and tackled our midfielder from behind. We were given a direct free kick, which means that no one needs to touch the ball before it is kicked, but we didn’t capitalize on our chance. One of my teammates asked the ref, “Sir, how much time is left?” and he replied, “Six minutes.” My team was becoming more on edge, we needed to get one more goal. Without this goal, we would not get the necessary points to move on to the next round in our league. Picking up the intensity, and trying to relax when we got the ball, my team connected a series of passes that helped us to break the other team’s defense. We knew going into the match that we were not going to beat them on a physical level, they were just too big. We needed to create opportunities by passing around them and making them tired. It is similar to a cat and mouse game, we wanted them to have to chase us, we were the mice and the prey was after us. Our center forward spun off and received a perfectly paced ball split between two defenders. She took a perfect first touch, her left leg planted next to the ball and her right leg swung back. Everyone heard the solid sound of her foot hitting the ball. A fantastic shot from just outside the 18 yard line. At that point, it seemed as if everything had froze. My breath stopped and the parents hushed. The ball flew gracefully threw the air, the goalie jumped, everyone watched. Then, as if cued, a unified, “aaagh” came from the parents’ section. My heart sunk as a defeated feeling cut through my gut. She had missed by just an inch, in the case of the metric system, about three centimeters. We were devastated. The other team had more league points, therefore, even if we tied, they would advance. Feeling utterly defeated, we played through the final whistle, knowing that our season was two minutes away from the end.

The shrill of the whistle blew threw our ears and we slowed from a jog to a walk. Our heads heavily hung as we handed out high fives to the other team. The slap of sweaty, clammy hands, and the murmur of “good game” brought my team and I to realization that our season was over. 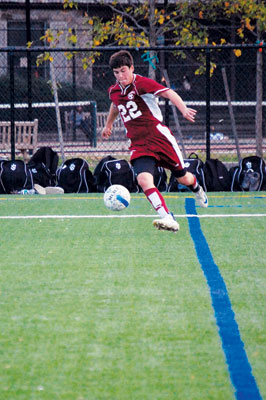 The author's comments:
This was inspired by a championship game that my team was in.
Post a comment
Submit your own