Favorite Quote:
"the quiet scares me because it screams the truth"

Joshua Clarence was born on April 19, 1990 at Humana Hospital in New Orleans, Louisiana. He is son of Lauren Nunez and Clarence, brother of Morgan, and the first of his generation of Bishop/Nunez’s. Josh was an athlete from the womb. “He kicked something fierce.” Said Lauren. When Josh was born his cousin’s ex-husband, Charlie Rader, visited him in the hospital the first thing he noticed was his hands, and said, “Oh my goodness. That boy’s going to be the Great White Hope. He’s going to play football.”

Joshua was never much of a crawler; he began walking at 9 months. By the time Josh was four years old him and his father would go outside and throw the baseball. When Josh turned five he began playing baseball and soccer for Pelican Park in Mandeville, Louisiana. By age six he started playing basketball. When he was seven, eight, and nine Josh was recommended by his coaches from each year to be on the all star league that followed the regular season. By the time Joshua was nine years old he decided to quit soccer and take up gymnastics with his little sister Morgan. It didn’t last long; by next year he dropped gymnastics and started his first year of football for Pelican Park and his first year of Tammany Tiger travel baseball.
From third to seventh grade Josh attended Our Lady of the Lake Roman Catholic School. At age 11, going into sixth grade, he tried out for both the basketball and flag football team. He made both teams and played for his sixth and seventh grade years. In flag football Josh played at quarter back, safety, punter, and kicker. The next year he was in eighth grade at St. Paul’s School, the Tammany Tigers ended due to all the boys going into high school sports, and Josh began his high school athletic career.

He went into St. Paul’s making the basketball, baseball, and football team. Basketball and baseball ended after his sophomore year and football seemed to be his chosen sport from then on out. During his high school football career Joshua played safety his 8th grade year, quarter back his 9th grade year, running back his 10th grade year, wide receiver in 11th grade, and tight end his senior year.

Q: How was your high school football career? What made you want to keep playing?
A: “It was awesome, the guys on the team and how close they got, being best in district, and going to Kurt Hester, it made me like, changed who I was, made me tougher not just for football for everything. And I loved my coaches too!”

Going into college Joshua had a few set backs. He started off, the summer going into his freshmen year, practicing with Tulane, but later on found out he wasn’t going to get a scholarship until the end of his junior year so he decided to leave. He said, “It was like selling my soul to the devil by taking that chance.” He left Tulane and started off the year at Southeastern since they still had a full ride academic scholarship on the table for him. He called the coaches and they told him they wanted to red shirt him after a few weeks of going there, again he decided it wasn’t the place for him, he wanted to be further from home. For the year he took off he decided to work out and get bigger for his position at tight end. He called LSU and reapplied there for spring semester of 2009. He tried walking on but the coaches said that they have already given out all of the roster sports for that year but still wanted him. They asked if he would be available for the next year. Josh told them that he would be available. The summer after that spring one of his friends from high school, Alex Williams, was looking for a place to play. Alex and his Dad went up to Millsap’s to talk to the coaches and while they were there they told the coaches about Josh. The coaches were very interested, called Joshua, and asked for his highlight films. Josh played at Millsap’s fall semester of 2009. Not knowing about Joshua being at Millsap’s, LSU called Josh asking if he still wanted to be on the team for the 2010 season and set up a meeting with him. Josh went up to Baton Rouge to meet with the coaches, during the meeting he told them about him playing for Millsap’s and the coaches told him they technically aren’t supposed to be talking to him. He decided to leave Millsap’s and walk on the team at LSU. He tried out in spring 2010 and made the team for the fall 2010 season.

For his first season with LSU he was ineligible to play, he could practice just not dress out or play, he had to be attending academically for 2 full semesters. His second semester ended by the end of 2010 and he was able to dress out for the last game of the team’s 2010 season, the Cotton Bowl.

Other sports that Joshua participated in were Soccer, basketball, baseball, gymnastics, and power lifting. He started soccer at age 5 and quit at 9, basketball from age 6 to 15, baseball from age 5 to 16, gymnastics from age 9 to 10, and power lifting from age 17 to 18. He said that there was never another reason than football for quitting these sports, other than just not wanting to play anymore. He played basketball and baseball starting from park ball until his sophomore year of high school.

Question and Answer
Q: Has there ever been a time when you just felt like you couldn’t take it anymore and just wanted to quit? What made you stay?
A: “Junior year when I was on Accutane I was supposed to play a lot but I didn’t get to and I wanted to quit but I knew it would be over soon, like off the medicine.”

Q: Whenever you had time off what did you do?
A: “I hung out with friends and played video games.”

Q: Why did you choose to focus on football instead of another sport?
A: “Uuum I guess I had the most potential in football and found out I could play in college because I had such a good senior year. I was the most successful in football.”

Q: Has there been a time when you felt like you just couldn’t take it anymore and wanted to quit? What made you stay?
A: “A few times. I felt I couldn’t keep up with the work load and school work load at the same time. On my first day I threw up 3 times and just wondered if I could even handle it. During summer conditioning it was tough; it’s just tough knowing that I wouldn’t even play. And I just promised that I would never quit again because when I left Tulane it killed me, and I knew if I looked back when I was 30 I would look back and think wow I could have played for LSU and just decided not to. It was my chance and I didn’t want to let it pass me by. You know?”

Q: If you get the playing time you look for in the next 2 years and get recognized by the NFL, do you plan on playing in the big times?
A: “Definitely.”

Q: On your time off what are some things you do?
A: “Sleep and eat. Play Xbox and tennis.”

Q: How do you think your family has felt about this in the past 4 years?
A: “They were probably really nervous about all my decisions but happy about the way they have turned out. Just like me.” 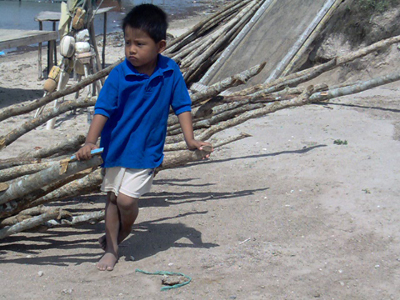 The author's comments:
:)
this is an interview