Whatdo you know about the martial arts? That a martial artist can fight dozens ofpeople and not get a scratch? That he says strange words and wears pajama-likeoutfits with belts and headbands? These stereotypes have little to do with thesport, yes sport, and art, and exist because of movies andtelevision.

Now, just as in the old days, traditional martial artists weara solid white uniform (called a gi or a dobak) that usually has a patch over theleft breast representing their specific style. They go barefoot and wear belts toindicate to instructors what they know. There are about ten belts, white throughblack. Black is the highest-colored belt, but there are degrees of black, too.

There are many different martial arts, from kung-fu to karate to tae kwondo, and each has its strong points. Tae kwon do, from Korea, is a dynamic,high-kicking art. Karate, from Japan, is punch-dominated, based on the beliefthat a person's power stems from the hips. Kung-fu, from China, is an art ofgrace and flowing techniques with strikes, kicks and punches modeled afteranimals.

There are two forms of the martial arts: the art and the sport.In the art form, a student obtains a vast knowledge of strikes, kicks andpunches, which form a kind of "dance of death" called a kata, or hyungand teaches the student how to execute techniques properly. Each form has aspecific application to each move that teaches the practitioner how to fightwithout actually having to fight. At the beginning and end of each class,students respectfully bow to the instructors and to the flag of the country wherethe art developed. Students gain a sense of respect and self-discipline that theycarry with them forever. Also, they learn how to say the techniques in the art'soriginal language.

As far as the sport aspect goes, training methods mustbe turned upside down to succeed in competition. All the previous techniques mustbe modified to be quick and disguised. If a person expects to win, he or she hasto be in shape, either from running, jumping rope or doing plyometricexercises.

In a karate competition, there are three categories: fighting(kumite), forms (kata) and weapon forms (kobudo). The katas and kobudo aredisplayed in front of five judges.

For the fighting aspect ofcompetitions, two people enter a ring ten meters in diameter and bow to eachother, then begin when the referee yells hajime. The bouts last from one and halfminutes to three minutes, depending on the fighters' age. To win, a competitormust score eight points. If you are over 14 and in the advanced division, thefighter must win by more than eight points.

Competitions aresponsored by the USA National Karate Federation, which is the national governingbody and is sanctioned by the U.S. Olympic Committee, since soon sport karatewill be in the Olympics. Both forms of the martial arts are necessary andcomplement each other. They both teach something important: respect andself-discipline.

When I was seven years old, my grandmother and I thoughtkarate lessons might be fun, so we went for a trial lesson. I walked into thedojo (karate school) and was greeted by a gentleman wearing what looked likepajamas. I hid behind my grandmother while they spoke and filled out forms. Ibowed, then walked onto the floor.

That evening I said, "I never wantto go back because I'm not going to bow down to anyone or anything!" I triedbasketball, but it did not fit me because I do not play team sports well. A fewyears later, my grandmother asked if I would give karate another try, and Ireplied, "Yeah, I guess."

We scheduled the introductorylesson. We walked into the dojo for the second time and were greeted by the samegentleman wearing his "pajamas." I loved it this time, but two weekslater I injured my foot doing a flying side kick. I was out for a month andmissed all my new karate friends. When I healed, I got back and advancedrapidly.

Soon, I was a blue belt (halfway to black) and friends with thehead instructor's son. Then, I really began progressing. I was clocking in moreand more time in the dojo. Eventually, I moved in with my grandparents so that Icould be with my new friends more. Then, a stupendous thing happened: I won thenational championships. After that, I thought I could do anything.

A fewmonths later, I began going to a new school and church and made new friends. Allof this gave me an abundance of self-esteem and confidence. This was all madepossible because of the martial arts, and to top it all off, I now am a multiplenational champion, Junior Athlete of the Year, and an instructor for the karateschool where I began six years ago. 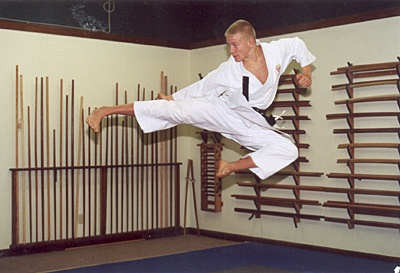